Tokyo Games: Indian men's hockey team defeated Germany in the bronze match to end a 41-year wait for a medal at the Olympics. 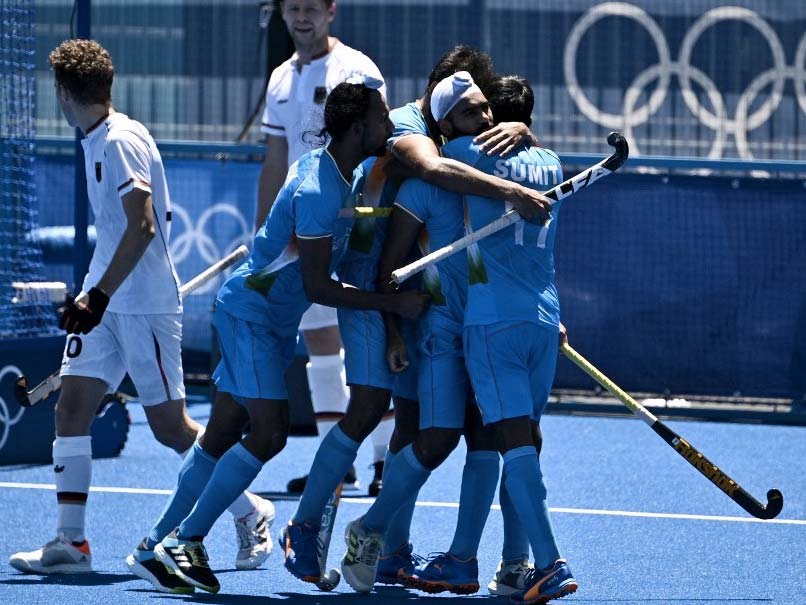 India defeated Germany in the bronze medal match at the Tokyo Olympics.© AFP

Indian men's team defeated Germany 5-4in the bronze medal match to end the country's 41-year wait of an Olympic medal in hockey on Thursday. Simranjeet Singh was the star of the show, scoring a brace while Harmanpreet Singh, Hardik Singh and Rupinder Pal Singh also got their names on the scoresheet. After their thrilling win over Germany, social media was abuzz with congratulatory messages for the Indian men's hockey team. Former India cricketer Gautam Gambhir led the wishes, calling the win "bigger than any World Cup".

Forget 1983, 2007 or 2011, this medal in Hockey is bigger than any World Cup! #IndianHockeyMyPride pic.twitter.com/UZjfPwFHJJ

Gambhir's former India teammate Virender Sehwag also took to Twitter to congratulate the team on a stunning comeback. He called the bronze medal win, a landmark day for Indian hockey.

"Chak De Fattey ! Burraaah  A landmark day for  @TheHockeyIndia After being down 3-1, INDIA fights back to win the bronze medal match 5-3, a first Olympic medal in #Hockey after 40 years. Mazaa aa gaya #IndvsGer," Sehwag tweeted.

Chak De Fattey ! Burraaah
A landmark day for @TheHockeyIndia
After being down 3-1, INDIA fights back to win the bronze medal match 5-3, a first Olympic medal in #Hockey after 40 years. Mazaa aa gaya #IndvsGer pic.twitter.com/0T3ssVPnRG

Wow!! Indian Men's Hockey Team Congratulations. Resilience and skill at its peak. What an exciting match.

Congratulations to each & every member of the hockey contingent on winning the #Bronze for India!

A fantastic hard fought win...The penalty corner save by Sreejesh in the dying moments of the game was amazing.

Heartiest Congratulations to the Indian Men's hockey team! We are super proud of your efforts & this victory will forever be cherised! #Hockey #Olympics #Tokyo2020 pic.twitter.com/OxLqRfney0

History! Congratulations to our hockey team on creating history! An outstanding achievement that won't be forgotten pic.twitter.com/2ZQQUk8mxl

Congratulations . Bronze in Hockey after 41 yrs . What a game. Proud of Indian Hockey. @TheHockeyIndia @Olympics pic.twitter.com/JkJVZYWNp3

An #OLYMPIC medal in #HOCKEY after 41 years. So happy to have called this match from the commentary box with Raman Bhanot. Smiles now. Il probably cry later. Means so much to Indian hockey. I'm so proud to be an Indian hockey player and so proud of this team pic.twitter.com/gXEWIKNzsz

Congratulations to the Men's #Hockey Team on clinching Bronze at #Tokyo2020. Truly a historic moment for the country after a wait of 41 long years. Congratulations to each and every player and staff! @TheHockeyIndia #TeamIndia #Olympics

What a day for Indian Hockey . So proud of the entire contingent and now for the Women. #IndianHockey

In the match, India conceded an early goal as Timur Oruz scored in the second minute of the bronze medal clash.

Simranjeet Singh pulled one back for India to make it 1-1. India scored two more goals in the second quarter and at the halfway stage the match was evenly poised at 3-3.

In the fourth quarter, Rupinder Pal Singh gave India the lead after getting a penalty stroke.

Simranjeet then scored again to give India a two-goal lead going into the final 15 minutes of the contest.

Germany started the fourth quarter with an early goal but the Indian defence managed to keep their nerves as they saw off a flurry of attacks from the Germans in the last few minutes to ensure a podium finish.

Comments
Topics mentioned in this article
Olympics 2020 Olympics India India Hockey
Get the latest updates on ICC T20 Worldcup 2022 and CWG 2022 check out the Schedule, Live Score and Medals Tally. Like us on Facebook or follow us on Twitter for more sports updates. You can also download the NDTV Cricket app for Android or iOS.