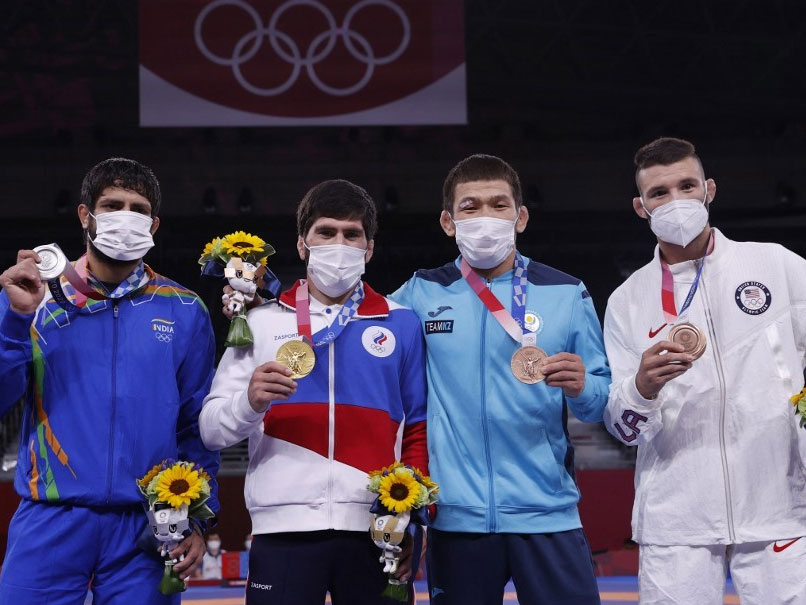 Despite a valiant effort, Ravi Dahiya lost to Zavur Uguev to win a silver medal in the men's wrestling freestyle 57kg final at the ongoing Tokyo Olympics on Thursday. The ROC wrestler registered a 7-4 win against Dahiya. Meanwhile, Deepak Punia fell to a narrow 2-4 defeat against Myles Nazem Amine in the men's freestyle 86kg bronze medal match. The Indian wrestler saw his medal hopes falter due to a late comeback from his San Marino opponent, who sealed a win in the last minute.

Golfer Aditi Ashok finished Round 2 of women's individual event on a strong note. The Indian wrapped up the round with 5 under par (-5) 66 points. She is tried at 2nd rank 9 under par (-9) with total of 133 points.

Meanwhile, Vinesh Phogat crashed to a shocking defeat against Vanesa Kaladzinskaya of Belarus at the 53kg freestyle wrestling 1/4 final. The Indian wrestler, who was trailing 3-9, lost the bout via fall. Phogat had earlier defeated Sofia Mattsson in the 1/8 finals. She was also out of contention for the repechage round as Kaladzinskaya lost her semi-final bout to Pang Qianyu.

Wrestler Anshu Malik lost her repechage round 2 at the women's freestyle 57kg category. She lost 1-5 to Valeria Koblova.

Comments
Topics mentioned in this article
Olympics 2020 India Vinesh Phogat India Olympics Live Blogs
Get the latest updates on ICC Women's Cricket World Cup 2022 and IPL 2022, check out the Schedule , Live Score and IPL Points Table. Like us on Facebook or follow us on Twitter for more sports updates. You can also download the NDTV Cricket app for Android or iOS.