Matt Stutzman, US Archer With No Arms, Jokes About Buying First Bow

Matt Stutzman won silver at the London Paralympics and last year was certified by the Guinness World Records for the longest, accurate shot at 283.47 meters (930.04 feet) 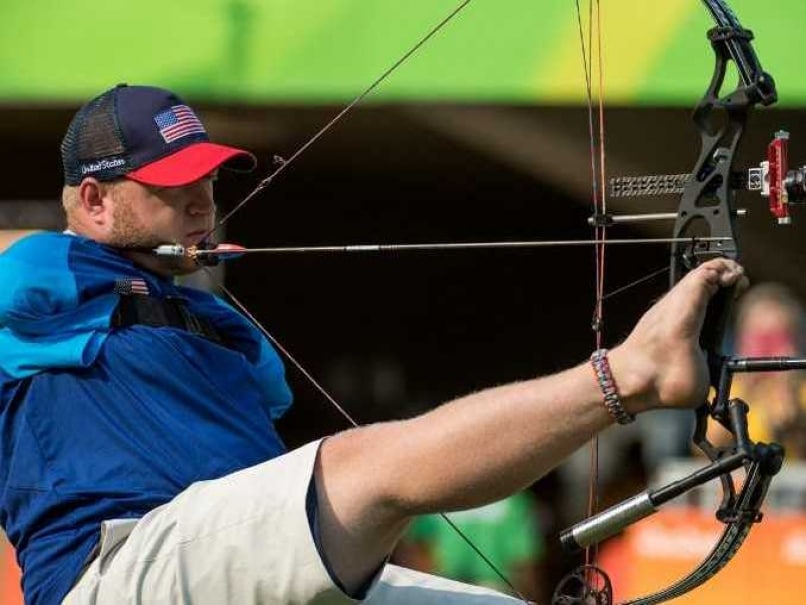 Matt Stutzman holds a world record for the most accurate distance shot in archery, which includes able-bodied archers.Â © AFP

A man with no arms walks into a shop selling bows and arrows -- yes, US Paralympic star archer Matt Stutzman agrees this could sound like the start of a joke.

But it really happened and today, incredibly, Stutzman is not only a top Paralympic archer competing in Rio de Janeiro, but the Guinness World Records holder for the longest shot.

Feeling "depressed" by his inability to contribute to the family or work while his wife Amber scrambled with two jobs, Stutzman decided in 2009 on an unlikely solution.

"When you're desperate to help provide for your family, you'll be willing to try whatever," the 33-year-old said after competing on Wednesday.

"I just saw a bow and (said) that's what I want to do, I'm going to go out, going to harvest an animal, put it in the freezer and have food."

First Stutzman, who was born without arms, had to go to a store.

Stutzman said he searched online for tips on how to fire arrows with no hands or arms and found nothing. But he had well-developed foot skills, being able to shave, write, even drive with his feet.

"I think I can do everything. Sometimes it can take me longer. I can tie my shoe -- it might take me two minutes instead of 30 seconds, but I can still do it," he said.

Actually, there's one thing where he comes up short, he jokes.

"My wife is up there and I usually tell her I can't change dirty diapers."

To shoot, he sits, holding the bow out with his right foot, then extends his leg to bend it. The string holding the arrow is fastened to his body until he activates a release and the arrow flies.

He's come a long way over the last seven years.

"At my first tournament, I asked the lady where the other armless archers were and she said, 'What do you mean?' I didn't know I was the only one that did it," he recalls.

Stutzman won silver at the London Paralympics and last year was certified by the Guinness World Records for the longest, accurate shot at 283.47 meters (930.04 feet).

His success has given him a living and made him something of a celebrity. In the sparsely attended archery venue in Rio he was warmly applauded.

"I'm not saying I'm like LeBron-rich," he quipped, referring to US basketball superstar LeBron James, "but I'm comfortable, I'm OK. It's not stressful anymore."

"I just wanna be the best archer in the world, I don't care who it is -- if he has a disability, or not."

Comments
Topics mentioned in this article
Archery Olympics 2016
Get the latest updates on IPL Auction 2023 and check out  IPL 2023 and Live Cricket Score. Like us on Facebook or follow us on Twitter for more sports updates. You can also download the NDTV Cricket app for Android or iOS.