Tim Southee knew as soon as the ball hit the pad but Virat Kohli hesitantly went ahead with the decision to take a review. 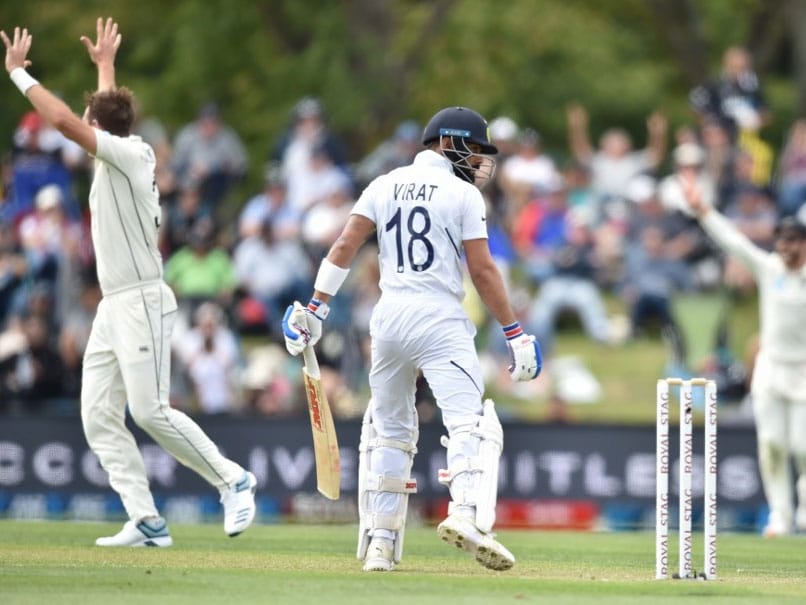 Virat Kohli failed to make an impact once again.© AFP

Virat Kohli failed to make an impact once again as he was removed cheaply by Tim Southee on the opening day of the second Test between India and New Zealand at Hagley Oval in Christchurch on Saturday. To make the matters worse, Virat Kohli consumed India's only review after Mayank Agarwal used one in the first session. Tim Southee knew as soon as the ball hit the pad but Virat Kohli hesitantly went ahead with the decision to take a review after discussion with Cheteshwar Pujara. Virat Kohli had missed the ball by some distance and impact was right on off stump. Soon, fans took to Twitter to slam the Indian captain for another poor outing and "wasting" the review.

Low score again for @imVkohli puts India in greater pain. How eell Kiwi bowlers have tested him with swing and seam. Big session for both teams now. Couple of more wickets and New Zealand will have taken vice like grip on match

Cricket is a team sport. But not for Virat Kohli. Clearly put himself ahead of the team, yet again.

7 more wickets left, last review and wasting it on such a straightforward LBW is unforgivable. #NZvInd pic.twitter.com/gG2dteK60Q

Virat Kohli always thinking that he isn't out when it's comes to lbw decision in Test Cricket.

But the fact that he has been successful DRS only 2 times out of 13 he taken.

We suffer for DRS later. So don't use DRS just because of you are the captain.#NZvIND #TeamIndia pic.twitter.com/XS7sa25vMc

Taking advantages of captaincy Virat Kohli using referrals every time and always wasting it.. which can better used for better chances for rest of batsman..#INDvsNZ #NZvsIND

Virat Kohli, whose top score of the tour is 51, managed just three runs before Southee removed him.

It was the seventh time during the ongoing tour that Virat Kohli failed to reach 20.

Kohli, who lasted just 15 deliveries at Hagley Oval, has not scored a century in his last 21 innings.

His last three-figure score came in the day-night Test against Bangladesh in Kolkata when he scored 136.

However, this is not the first lean patch of Kohli's stellar career.

As far as the match is concerned, New Zealand captain Kane Williamson won the toss and opted to bowl.

India, who trail the two match series 0-1, lost four early wickets as the hosts tightened their grip on the match early on Day 1.

Tim Southee New Zealand vs India, 2020 Cricket New Zealand vs India, 2nd Test
Get the latest updates on ICC Women's Cricket World Cup 2022 and IPL 2022, check out the Schedule , Live Score and IPL Points Table. Like us on Facebook or follow us on Twitter for more sports updates. You can also download the NDTV Cricket app for Android or iOS.