In the second match running, India denied New Zealand victory during the stipulated overs and went on to win in the Super Over. 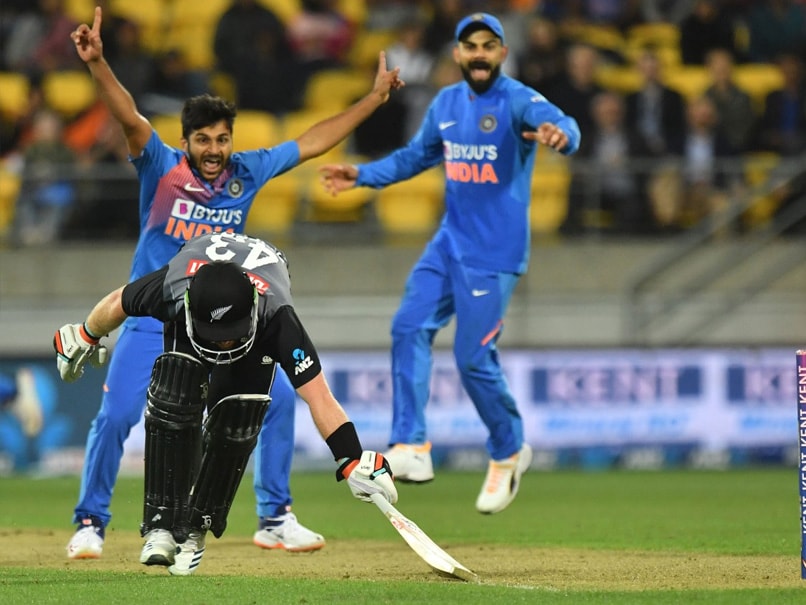 Shardul Thakur's brilliant final over in the regulation play took the game to the Super Over.© AFP

India once again came from behind to script a nail-biting victory in the second match running as they beat New Zealand in the Super Over to clinch the fourth Twenty20 International (T20I) in Wellington on Friday. With 18 needed off 18 balls, New Zealand were once again the favourites to win the tie, but they shot themselves in the foot and crumbled from 155/3 in 17 overs to 165/7 at the end of regulation play. Shardul Thakur was the hero for India as he first scored crucial runs batting down the order and followed it up with a brilliant final over in the regulation play, taking the game to the Super Over. New Zealand smashed two boundaries in the Super Over to set a 14-run target for the visitors.

KL Rahul began India's chase with two consecutive boundaries -- a six and a four off first two balls -- off the bowling of New Zealand's stand-in skipper Tim Southee. Rahul went for another big hoick and paid the price as he was caught on the fence.

However, Indian skipper Virat Kohli finished off the match in style by pulling Southee's short ball for a boundary, handing the visitors a 4-0 lead in the five-match series.

Earlier, New Zealand won the toss and opted to bowl. After sealing the series in the last match, India made three changes to their playing XI and rested Rohit Sharma, Ravindra Jadeja and Mohammed Shami.

Sanju Samson, who opened the innings with KL Rahul, showed his class, smashing Scott Kuggeleijn into the stands but fell in the very same over.

India suffered another huge blow in the powerplay as skipper Virat Kohli also departed cheaply. After Kohli's dismissal, Shreyas Iyer also failed to make any impact in the game.

However, Rahul kept scoring runs from one end. When he got out in the 9th over India were in a spot of bother as they had lost five wickets inside 10 overs.

Manish Pandey (50 off 36 balls) and Shardul Thakur (20 off 15 balls) rescued Indian innings by adding 43 runs for the seventh wicket.

Chasing 166 to win, New Zealand got off to a poor start as they lost Martin Guptill early. However, Colin Munro (64 off 47) and wicket-keeper Tim Seifert (57 off 39) rescued their innings and pushed the hosts in front with a 74-run stand for the second wicket.

India crawled back in the game by effecting two run outs to dismiss Munro and Tom Bruce in quick succession.

Despite that, a 62-run partnership between Ross Taylor and Seifert gave New Zealand control of the match.

However, New Zealand batsmen succumbed under pressure and played some poor shots, allowing India a chance to get back in the game.

Navdeep Saini, making his first appearance in the series, conceded only two runs in the penultimate over, leaving New Zealand with seven to get from last six balls.

However, New Zealand let the match slip away from a dominant position as they lost four wickets in the final over bowled by Shardul Thakur, including two dismissals via run out.

India came up trumps in the Super Over to register their second consecutive win via a tie-breaker and go 4-0 up in the series.

The last match of the series will be played at the picturesque Bay Oval stadium in Mount Maunganui on February 2.

Westpac Stadium, Wellington New Zealand vs India, 2020 Cricket New Zealand vs India, 4th T20I
Get the latest updates on IPL Auction 2023 and check out  IPL 2023 and Live Cricket Score. Like us on Facebook or follow us on Twitter for more sports updates. You can also download the NDTV Cricket app for Android or iOS.