Ravindra Jadeja completed a one-handed catch to break the partnership between Kyle Jamieson and Neil Wagner. 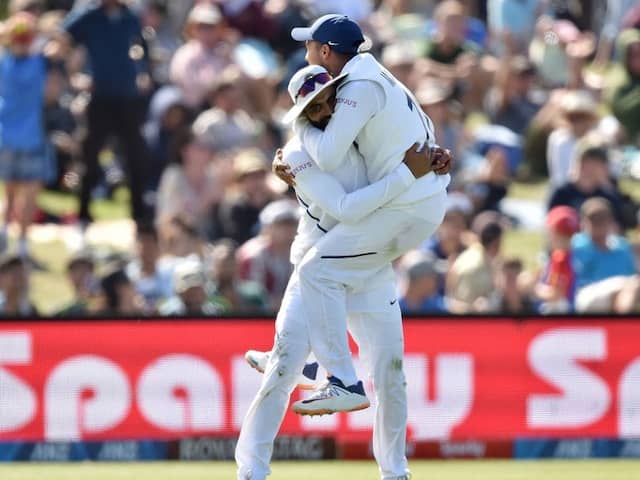 Ravindra Jadeja, arguably the best fielder in the world right now, pulled off an unbelievable catch to remove Neil Wagner on Day 2 of the second Test between India and New Zealand in Christchurch on Sunday. Wagner played a pull shot off Mohammed Shami and Jadeja, stationed at square leg, ran backwards, leapt high in the air and grabbed the ball in his left hand. With great judgement and control, Jadeja completed a one-handed miraculous catch to break the partnership between Kyle Jamieson and Neil Wagner that was frustrating India.

Soon, Twitter was flooded with high praise for Jadeja as some fans described it as "the catch of the year."

One of the all time great catches. Ravindra Jadeja ???? #NZvsIND
pic.twitter.com/nfPpWqFWxR

Best fielder in the world The sir jadeja pic.twitter.com/2DlooheDOt

#Wagner after that catch by #jadeja #NZvIND pic.twitter.com/6SjsokUd0a

Even though fielding is one of the most underrated things in Test cricket but Jadeja makes sure that it becomes the hottest talk whenever he plays.

A feisty spell of bowling led by Mohammed Shami and Jasprit Bumrah and the guile of spinner Ravindra Jadeja gave India a seven-run first innings lead over New Zealand.

It took a polished knock from Kyle Jamieson, in his second Test, to reduce the deficit as India struggled to mop up the New Zealand tail.

The last three wickets put on 82 runs, 49 of them by Jamieson to underscore his all-rounder credentials after taking five wickets in India's first innings.

Jamieson also took four wickets and smashed a quickfire 44 on debut in the first innings of the first Test.

New Zealand resumed the day at 63 without loss and were all out for 235 at tea as the Indian attack enjoyed their best day in the series.

India, who sit at the top of the ICC World Test Championship points table, had lost the first Test in Wellington by 10 wickets.