New Zealand pace spearhead Trent Boult said he is ready to challenge India captain Virat Kohli on his return to international cricket during the two-Test series. 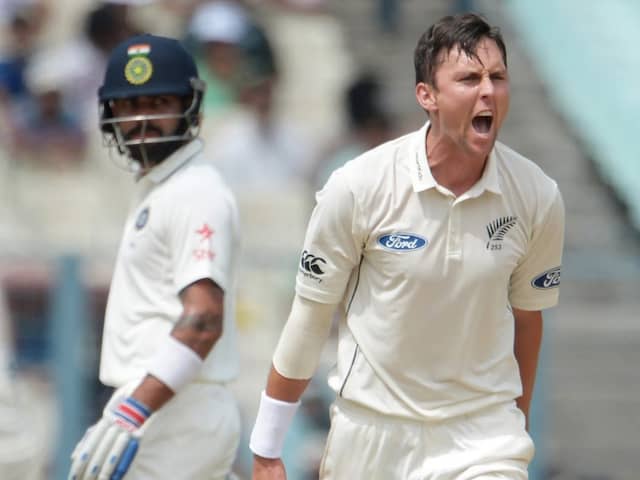 Trent Boult was out of action for the past six weeks due to a fracture on his right hand.© AFP

There are no half measures for fit-again New Zealand pace spearhead Trent Boult who is ready to challenge India captain Virat Kohli on his return to international cricket during the two-Test series starting in Wellington on Friday. Boult was out of action for the past six weeks due to a fracture on his right hand sustained during the Boxing Day Test against Australia and missed out on the limited-overs leg of the India series. Back for the traditional format, the left-arm fast bowler made his priorities clear ahead of the first Test.

"That's personally why I play the game, to get guys like that (Kohli) out and test myself against them, so I can't wait to get stuck in. But he's an exceptional player. Everyone knows how great he is," Boult said, sending out a warning after landing in the capital city for the opening Test.

New Zealand's last Test series in Australia was a nightmare as they lost 0-3 and India will be a tough test for the Black Caps.

"They are a great side and they are leading the ICC Test Championship. They are very clear on how they wanted to play the game. It was a tough learning curve in Australia. It's good to see where we are in terms of bouncing back," said Boult.

The Basin Reserve track will have a lot for the seamers and in conducive conditions, a wily customer like Boult will prove to be a handful for the travellers.

"I'm preparing for a solid wicket. It generally is very good here and goes the full distance (five days). I do enjoy playing here, the history that's involved, and it's going to be an exciting week building up. I can't wait to get out there," said the 30-year-old who has taken 256 wickets from 65 Tests.

It was frustrating for him to watch his side get walloped 0-5 in the T20 series but exhilarating when it got its mojo back in the subsequent one-dayers.

The Black Caps won 3-0 in the 50-over format. "I think it is what it is. I have just got to put the last six or so weeks behind me and just back myself to get out there and do my thing," said Boult, who warmed up by playing a club game at the picturesque Taupo ground.

Boult did find a bit of humour in his injury which, for him, was more of an accident.

"If I had to break a hand, (it would) probably be my right one. Breaking a hand, you don't really know how much you use it unless you break it," said Boult.

"I was pushing in off the long run. I think a couple of the clubbies from Taupo really enjoyed that. It was a good afternoon," added the pacer, who sent down eight overs in a friendly game for his club Cadets.

While bowling isn't a problem, Boult is hoping that catching doesn't become an issue.

"Everything has gone very well but catching will be the biggest issue for me," he said.

Professionally, Boult had to lie low due to injury, but it was also a good break as he and wife Lana welcomed their second child.

"Having some time away from the game and having my second son a couple of weeks ago came at quite a good time," said Boult.

Fighting fit, all he wants now is to get hold of a red kookaburra and get a few to tail into Kohli and company.

"I am hungry to be here and can't wait to get back in the white and get the red ball moving around," he said.

Trent Boult Basin Reserve, Wellington New Zealand vs India, 2020 Cricket New Zealand vs India, 1st Test
Get the latest updates on IPL 2020, check out the IPL Schedule for 2020 and Indian Premier League (IPL) Cricket live score . Like us on Facebook or follow us on Twitter for more sports updates. You can also download the NDTV Cricket app for Android or iOS.
Advertisement