During the fifth and final T20I, Sanju Samson showed mind-boggling athleticism to stop the ball from going for a certain six. 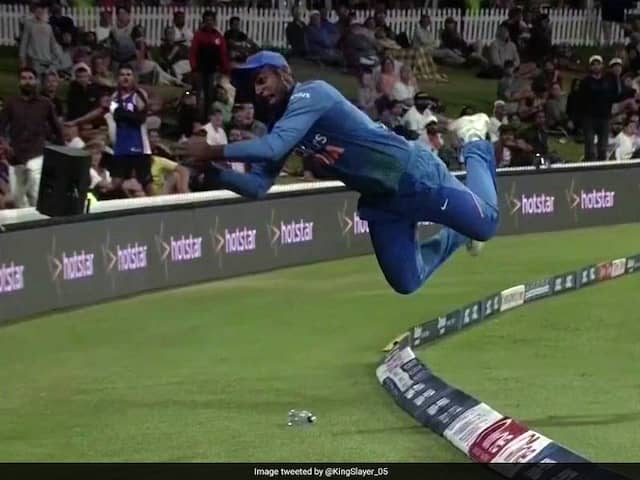 NZ vs IND: Sanju Samson stopped the ball from going for a six with an incredible fielding effort.© Twitter

India registered a historic 5-0 whitewash over New Zealand in the just-concluded Twenty20 International (T20I) series on Sunday, becoming the first team to clean sweep a bilateral five-match T20I series in the history of the game. There were many outstanding performances in the series. KL Rahul was sensational with the bat, Mohammed Shami and Jasprit Bumrah getting the job done with the ball. But one department that could see a little more improvement was fielding with the ever-safe Ravindra Jadeja also registering a rare drop catch. Otherwise a terrific fielding unit, India were not at their best in this series, however, there were still some exceptional efforts in the field from the Indians, though, none more impressive than Sanju Samson's incredible effort on the boundary ropes in the fifth and final T20I at the Bay Oval in Mount Maunganui.

Samson got two chances in the series to show his skills with the bat but failed both times. However, on Sunday, while fielding at deep mid-wicket, Samson showed mind-boggling athleticism to stop the ball from going for a certain six.

Ross Taylor whacked a Shardul Thakur delivery towards the mid-wicket boundary but Samson went airborne, parallel to the ground, took the catch and flicked it back into the field of play -- all this in mid-air. With the New Zealander running two runs, Samson ended up saving four runs for India.

Here is Sanju Samson's fielding effort that has gone viral on social media:

Eagle catch Everyone is so busy in celebrating the series win that they forgot the brilliant effort of sanju samson in today's match. What ah effect Wowww Sanju Something to take away from this series for Sanju Samson Has been a gun fielder in this series #NZvsIND #INDvsNZt20 #SanjuSamson #TeamIndia

India scripted history as they defeated New Zealand by seven runs in the fifth and final T20I.

With the win, India completed their first-ever T20I series sweep over New Zealand, handing the hosts their first whitewash in the shortest format (three or more matches in the series).

Chasing 164 for the win, New Zealand were cruising at 116 for three at one stage but they threw the match away yet again from a strong position. Jasprit Bumrah was exceptional during his spell of four overs as he picked up three wickets and gave away just 12 runs.

In the absence of Virat Kohli, Rohit Sharma led the Indian team but retired hurt while batting on 60, never to take the field again in the match. Rahul also impressed with the bat again, scoring a quickfire 45 after India had elected to bat.

The two teams will now face each other in a three-match One-Day International (ODI) series that begins on Wednesday.

Ross Taylor New Zealand vs India, 2020 Cricket
Get the latest Cricket news, check out the India cricket schedule, Cricket live score . Like us on Facebook or follow us on Twitter for more sports updates. You can also download the NDTV Cricket app for Android or iOS.