"Didn't Even Realise": Ravindra Jadeja Speaks About His Mind-Boggling Catch On Day 2 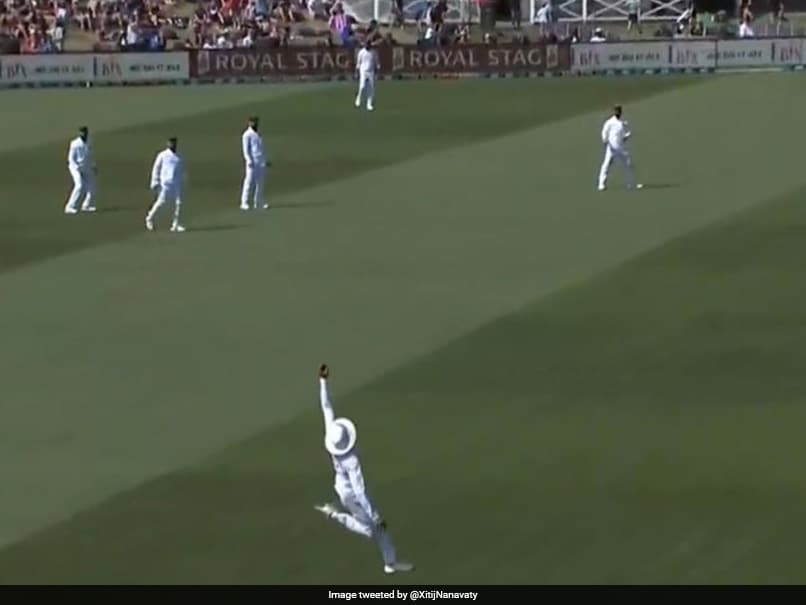 NZ vs IND: Ravindra Jadeja took a one-handed stunner to get rid of Neil Wagner.© Twitter

Ravindra Jadeja's stunning catch was the highlight on day two of the second Test between New Zealand vs India at the Hagley Oval in Christchurch on Sunday as India bowled New Zealand out for 235, taking a slender lead of seven runs. After being reduced to 142/5 at lunch, Kiwi pacers Kyle Jamieson (49) and Neil Wagner (21) shared a 51-run stand for the ninth wicket before Jadeja produced a mind-boggling effort at deep square leg, leaping high and plucking the ball out of thin air showing extraordinary reflexes to get rid of Wagner.

The all-rounder was immediately surrounded by his teammates as all of them basked in his fielding brilliance. The effort left Wagner flabbergasted too. At tea, Jadeja said he was expecting Neil Wagner to score heavily in the square leg region, but never thought the ball would come at that speed.

"I was expecting him (Wagner) to score towards deep square leg. But I didn't expect the ball to come at that pace. It came so quickly with the wind and I just stuck my hand out. I didn't even realise when I took the catch. We bowled well as a unit. We will look to bat well and bowl them out again," he said.

Mohammed Shami took four wickets while Jasprit Bumrah (3/62) also did well with the ball to tame New Zealand's wagging tail after they had threatened to punish India at one stage with Jamieson looking particularly impressive.

Earlier on Day 1, Indian batsmen played some reckless shots to be bowled out for 242.

Ravindra Jadeja Neil Wagner Kyle Jamieson New Zealand vs India, 2020 New Zealand vs India, 2nd Test Cricket
Get the latest updates on ICC T20 Worldcup 2022 and CWG 2022 check out the Schedule, Live Score and Medals Tally. Like us on Facebook or follow us on Twitter for more sports updates. You can also download the NDTV Cricket app for Android or iOS.