India overcame New Zealand's challenge with ease as KL Rahul and Shreyas Iyer scored fine half-centuries to give India a 1-0 lead in the five-match series. 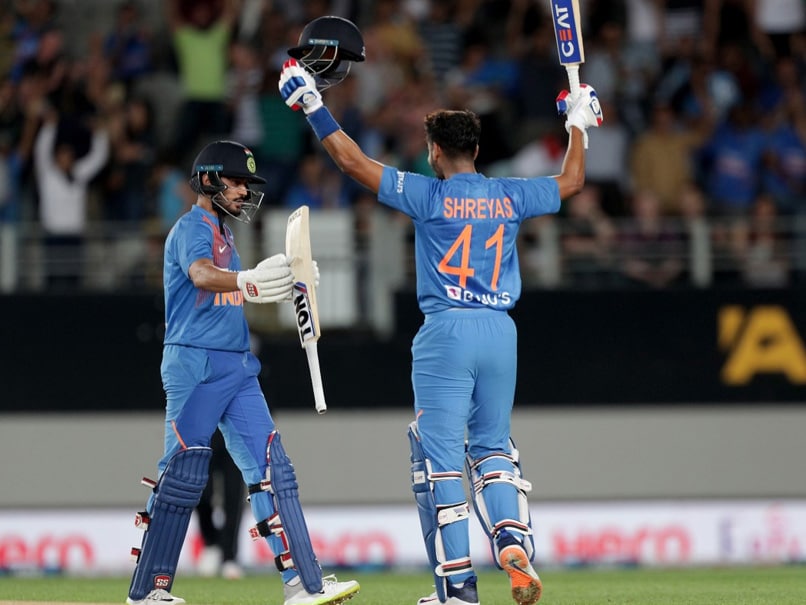 Shreyas Iyer and Manish Pandey helped India get across the finish line in 1st T20I.© AFP

Half-centuries from Shreyas Iyer (58 off 29) and KL Rahul (56 off 26 balls) helped India chase down a massive 204-run target given by New Zealand, with six balls to spare in the first Twenty20 International (T20I) at Eden Park, Auckland on Friday. India took a 1-0 lead in the five-match series after beating New Zealand by six wickets in the T20I. Indian skipper Virat Kohli anchored the innings in the middle overs with a 32-ball 45, allowing the other batsmen to flourish from the other end. Chasing a huge total in the series opener, the visitors got off to a poor start as opener Rohit Sharma fell in the second over, trying to hit left-arm spinner Mitchell Santner over the ropes.

After losing Rohit so early, skipper Kohli and Rahul took control of the innings and scored at a brisk pace, keeping the required run-rate under control.

The duo made full use of the field restrictions and short boundaries at Eden Park and took India to 65/1 at the end of first powerplay.

However, Rahul and Kohli's miscommunication in the middle almost costed India a wicket but the New Zealand fielders missed the golden chance and paid the price for it as they duo went to form a massive partnership for the second wicket.

The highlight of their 99-run partnership was Virat Kohli playing second fiddle to KL Rahul, who played a flamboyant innings from the other end.

Rahul fell soon after completing his 9th fifty in the shortest format. He got out in the 10th over after scoring 56 runs off 27 balls.

After Rahul's departure, Kohli tried to take charge but failed in the process. He was dismissed by Blair Tickner in the 12th over. These two wickets in succession helped the hosts get back in the game.

In the end, when things started to move away from India, Shreyas Iyer and Manish Pandey combined and added 62 runs for the fifth wicket, helping India get across the finish line with an over left.

Earlier, India skipper won the toss and elected to bowl. New Zealand riding on half-centuries from Colin Munro, skipper Kane Williamson and Ross Taylor posted 203/5 on the board.

Opening the innings, Martin Guptill and Colin Munro got their side off a great start as they 68 runs in first six overs that too without losing any wicket.

Guptill was the first wicket to fall for the hosts when he was dismissed by all-rounder Shivam Dube for 30 runs in the eight over of the innings.

Williamson and Taylor provided them with the much-needed acceleration towards the end, helping them post an imposing total.

Eden Park, Auckland New Zealand vs India, 2020 Cricket New Zealand vs India, 1st T20I
Get the latest updates on ICC Women's Cricket World Cup 2022 and IPL 2022, check out the Schedule , Live Score and IPL Points Table. Like us on Facebook or follow us on Twitter for more sports updates. You can also download the NDTV Cricket app for Android or iOS.