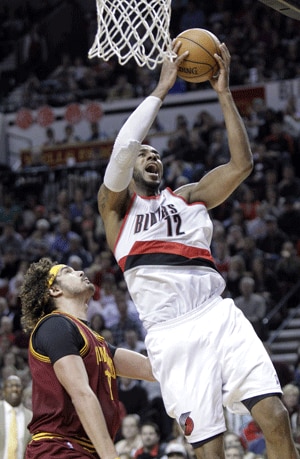 Portland closed within half a game of the NBA Western Conference lead by beating San Antonio 109-100 in a bad-tempered clash on Friday, led by LaMarcus Aldridge's 26 points and 13 rebounds.

In a day of key games for the top teams in the West, Oklahoma City beat Golden State with Kevin Durant scoring a career-high 54 points, while the Los Angeles Clippers increased its Pacific Division lead by downing New York, and Dallas edged Phoenix.

Manu Ginobili had a season-high 29 points for the Spurs but fellow veterans Tim Duncan and Tony Parker struggled in the second half.

Serge Ibaka had 21 points and eight rebounds for the Thunder, who shot 58 percent from the field and recorded their highest score of the season.

Stephen Curry had 37 points and 11 assists for the Warriors, who were also impressive in shooting 52 percent but simply could not contain Durant.

Dallas rookie Shane Larkin sank two free throws with 11 seconds to play to secure a 110-107 win for the Mavericks over Phoenix.

The Suns had a chance to tie the game but P.J. Tucker's try from the corner rimmed out, and replays showed his foot was on the line so it would have been for only two points, anyway.

Larkin finished with 18 points, and Monta Ellis scored 24 for the Mavericks, who never trailed.

Jamal Crawford added 29 for the Clippers, who dominated the second half to hand the Knicks their third consecutive loss.

Miami ended a rare three-game losing streak with a 101-86 win over Philadelphia, with LeBron James having 21 points, 10 assists and eight rebounds.

Chris Bosh scored 25 points for the Heat, who led by 25 points and cruised to victory.

Toronto won at home against Minnesota for the tenth-straight time, beating the Timberwolves 94-89.

Kyle Lowry scored 24 points and Amir Johnson had 19 for the Raptors, who won their sixth straight home game. It's their longest home streak since 2010. Lowry made a season-high six 3-pointers.

Kevin Love had 16 points and 12 rebounds for the Timberwolves, who lost their third straight.

Washington's John Wall had 23 points and 11 assists as the Wizards beat Chicago 96-93 to match their wins and losses total for the first time this season.

Memphis edged Sacramento 91-90, with Mike Conley taking possession of a jump ball in the final two seconds to secure a win which was the Grizzlies' fifth straight.

Utah's Trey Burke had 20 points and a career-high 12 assists in his return to Michigan where he starred as a college player, leading the Jazz to a 110-89 win over Detroit.

Boston point guard Rajon Rondo returned from a year out with a knee injury and missed a 3-pointer that could have sent the game into overtime, allowing the Los Angeles Lakers to hang on for a 107-104 win.

Charlotte's Al Jefferson had 30 points and 16 rebounds as the Bobcats beat Orlando 111-101.