According to reports, it was after the opening over-time loss in California when LeBron James injured himself. 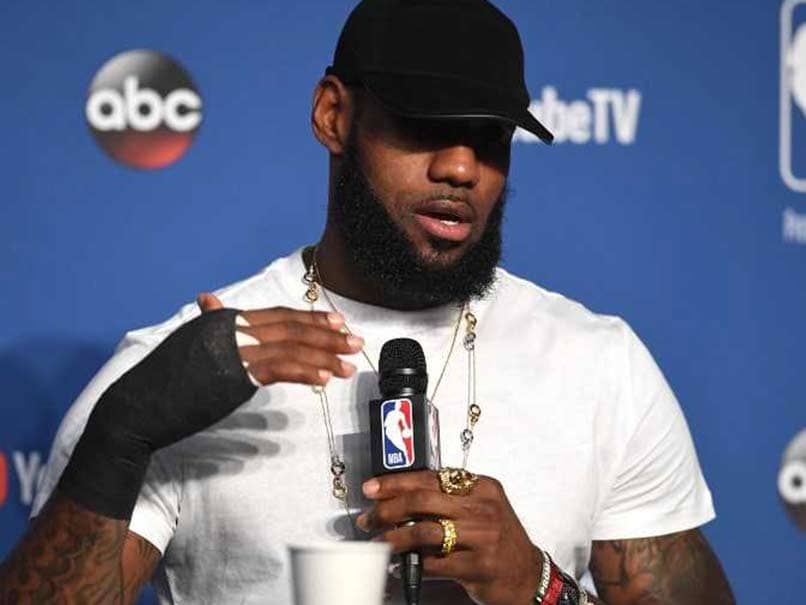 LeBron James speaks to the media with a cast on his right hand after Game Four of the NBA Finals.© AFP

Cleveland Cavaliers superstar LeBron James revealed on Friday after his team was swept in the NBA Finals that he played the last three games with a broken right hand. The Golden State Warriors beat the Cleveland Cavaliers 4-0 in the best-of-seven championship series, but it was after the opening over-time loss in California when LeBron James injured himself. "I let my emotions get the best of me and played the last three games basically with a broken hand," James said, displaying his soft cast.

LeBron James had become upset in the final seconds of regulation time in the 114-124 defeat, when a foul call was reversed to allow Golden State to equalize and J.R. Smith grabbed a late rebound with the score level but dribbled away from the basket, thinking the Cavaliers led.

Images of a frustrated James talking to Smith became an internet sensation.

ESPN reported James hit a blackboard in the locker room after that game and underwent two MRI exams that showed the fracture, a fact he kept hidden so the Warriors would not know.

"Obviously, I don't have a boxing hand," James said.

The Warriors inflicted the first 4-0 NBA Finals blanking since the Cavaliers were swept by San Antonio in 2007.

It was the fourth year in a row the Warriors and Cavaliers met in the finals, Golden State winning in 2015 and the past two years.

Comments
Topics mentioned in this article
Golden State Warriors Cleveland Cavaliers LeBron James NBA
Get the latest updates on IPL 2021, IPL Points Table , IPL Schedule 2021 , live score . Like us on Facebook or follow us on Twitter for more sports updates. You can also download the NDTV Cricket app for Android or iOS.