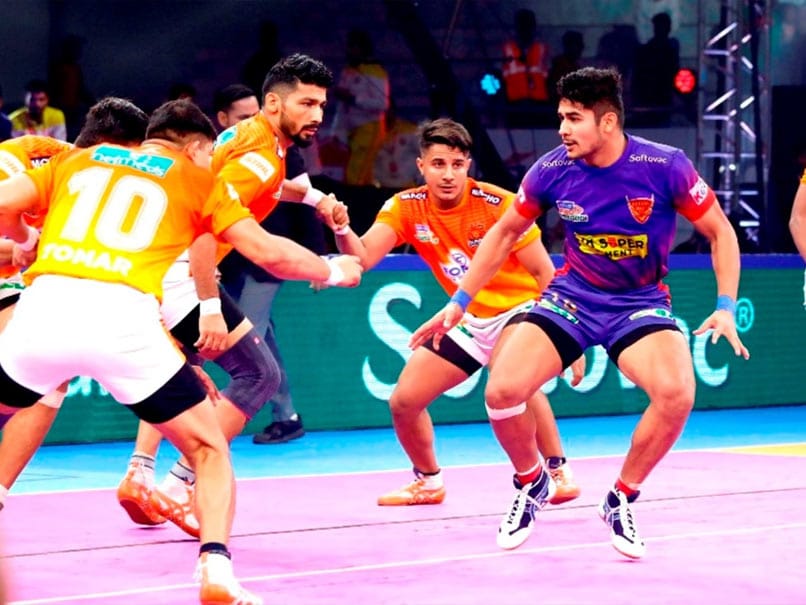 Puneri Paltan's hopes of reaching the Pro Kabaddi Season 7 playoffs ended after Dabang Delhi thrashed them 60-40 at the Tau Devi Lal Sports Complex in Panchkula on Sunday. Naveen Kumar starred for table toppers Dabang Delhi as the young raider picked up his 17th consecutive Super 10. In the other match, Haryana Steelers sealed a berth in the playoffs after a close-fought win over Gujarat Fortunegiants. Vikas Kandola starred for Haryana Steelers as edged the match with a 38-37 scoreline.

Dabang Delhi started aggressively with Naveen Kumar picking up points at will, showing off some acrobatic moves in the process. The Delhi side inflicted an All-Out against Puneri Paltans as early as the 7th minute. Puneri Paltan struggled in the absence of their star raider Pankaj Mohite, who missed out on the match due to a fever.

Over the course of the match, Naveen Kumar clinched a personal record of becoming the fastest player to secure 400 raid points in Pro Kabaddi history.

Dabang Delhi secured a second All-Out seven minutes from the end of the first half, opening up a 14-point lead.

The second half followed a similar pattern to the first. Dabang Delhi's Chandran Ranjit secured his Super 10 as the team secured yet another All-Out.

Balasaheb Jadhav got a High 5 for Puneri Paltan but their poor defence and toothless raids led to another All-Out for Dabang Delhi with slightly more than five minutes still remaining in the match. Dabang Delhi's Ravinder Pahal also secured a High 5 as they secured the biggest points tally in the season.

Dabang Delhi remain on top of the table after the dominating win.