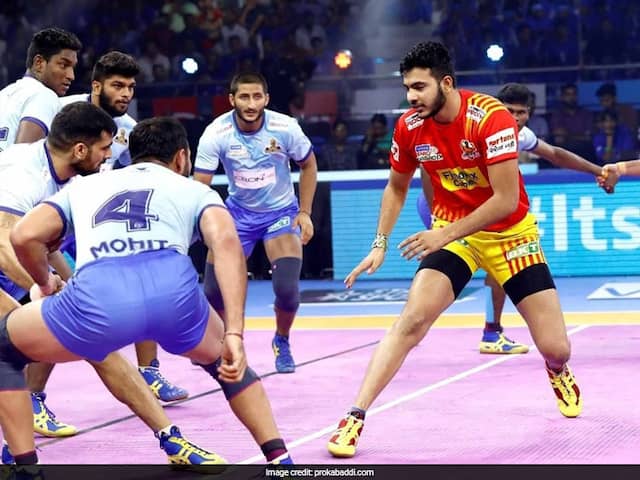 Gujarat Fortunegiants moved closer to the top 6 in the Pro Kabaddi Season 7 standings after a 50-21 win over Tamil Thalaivas at the Tau Devilal Sports Complex in Panchkula on Saturday. In another match, UP Yoddha's edged past Haryana Steelers 37-30. It was a dominant display by Gujarat Fortunegiants' raiders as Sonu and Rohit Gulia starred with 15 and 11 raid points respectively. Both teams got on the scoreboard early, but it was Gujarat Fortunegiants who were looking like more of a threat.

Sonu consistently scored raid points, while their defence also looked sharp and made life difficult for Tamil Thalaivas' raiders. A two-point raid by Gulia eventually enforced the first All Out of the match on Tamil Thalaivas and gave Gujarat Fortunegiants an 11-4 lead.

Now in the driver's seat, Gujarat Fortunegiants continued to dominate for the remainder of the half. Raider Sonu and all-rounder Gulia proved to be their biggest threats and didn't allow Tamil Thalaivas' defence any respite to give their side a 20-9 lead going into the break.

The second half followed the same script as the first with Gujarat Fortunegiants' supremacy evident from the first minute. More successful raids by Sonu and Gulia, in conjunction with some robust tackles, helped inflict a second All Out on Tamil Thalaivas as Gujarat Fortunegiants extended their lead to 17 points.

Tamil Thalaivas found scoring even more difficult in the ensuing period as Gujarat Fortunegiants kept getting on the scoreboard through a combination of clinical raiding and ruthless defence. The two-time finalists went on to enforce a third All Out to make it 40-14 in their favour and pile on the points on the southerners.

They eventually won the contest by a whopping 29 points and will undoubtedly go into their next encounter at the same venue on Sunday high on confidence.