This was Jaipur's fourth win from 15 games, while the Thalaivas tasted their 11th defeat from 18 games. 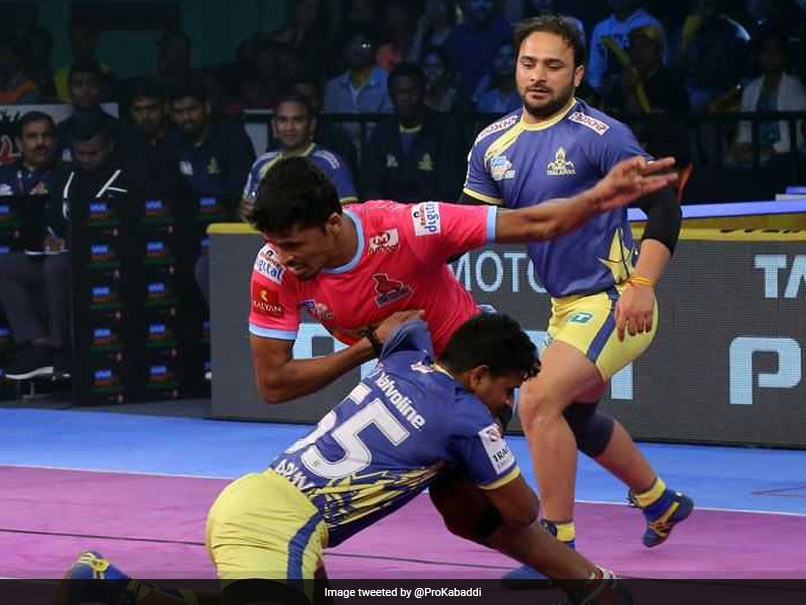 The half-time saw Jaipur leading 17-10 against their opponents.© PKL/Twitter

A collective effort by the Jaipur Pink Panthers guided them to a fantastic 37-24 victory over Tamil Thalaivas in an Inter-Zonal contest of the Pro Kabaddi League (PKL) at the Rajiv Gandhi indoor stadium in Vizag on Sunday. In the other fixture, Telugu Titans registered a 35-31 win over Haryana Steelers. This was Jaipur's fourth win from 15 games, while the Thalaivas tasted their 11th defeat from 18 games, which make their play-offs dream difficult.

Jasvir opened Thalaiva's account with a successful raid but Anand also responded for Jaipur to make it 1-1. Both the teams' skippers, Ajay Thakur and Deepak, then came with a raid point each to once again level it 2-2 by the fourth minute.

The issue was once again tied at 5-5 by the ninth minute and both the teams traded raid and tackle points as the contest was once again levelled at 7-7 by the 14th minute. Anand came with a two-pointer to help Jaipur take a meagre 10-8 lead before his skipper Deepak's stunning three-point raid not only inflicted an all-out but also helped Jaipur take a healthy 16-8 lead.

The half-time saw Jaipur leading 17-10 against their opponents.

In the second-half, Ajay failed to make a successful raid, while Ajinkya succeeded as Japiur stretched their lead to 19-10. However, Sukesh Hegde's fantastic raid attempt followed by a tackle of Ajinkya Pawar helped Thalaivas to cut the deficit to 13-20 by the 27th minute.

Jaipur took a couple of points in the later moments but Ajay also responded with a two-pointer raid to make it 16-22. Jaipur then inflicted an all-out in the 31st minute to make the score 23-16 in their favour.

Jaipur then further rode Deepak's stunning raids to extend their lead to 27-17 by the 35th minute, leaving the Thalaivas with just one player, Jasvir, on mat.

The Deepak-led side soon inflicted another all-out to make it 30-18 with just four minutes to go. Anand once again collected a couple of points in a single raid attempt, while Ajay's another unsuccessful attempt saw Jaipur making it 34-20.

Thalaivas then made a change as Victor Oberoi replaced Jasvir and the former also didn't disappoint his team, taking three points from two raid attempts to make the issue 24-34 before Jaipur once again roared back in style to collect three points in the dying moments to register a comfortable 37-24 victory over the Thalaivas.