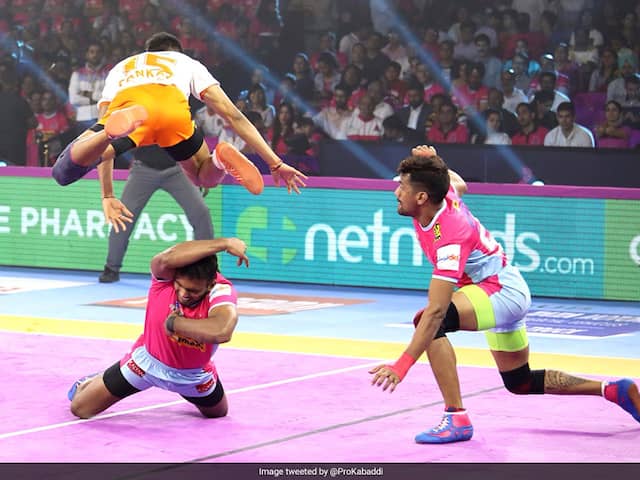 Bengal Warriors defeated Telugu Titans by one point in a Pro Kabaddi League season 7 match at Jaipur's Sawai Mansingh Stadium on Wednesday. Bengal Warriors raider Maninder Singh claimed 17 points, helping his side clinch the nail-biter 40-39 and go at the top of the points table. In the second match of the day, hosts Jaipur Pink Panthers thumped Puneri Paltan 43-34. For the hosts, Deepak Niwas Hooda (12 points) and Deepak Narwal (11 points) were the standout performers. Pune's Pankaj Mohite clinched 14 points but could not bridge the gap between the two sides. He did not get much support from his team members as they failed to chip in with points at crucial junctures of the match.

Telugu Titans' Siddharth Desai scored 15 points but couldn't help his team get past the finish line. With this loss, Telugu Titans are almost out of the playoffs contention as they are at 11th position in the 12-team points table, with just 34 points from 17 games.

Both Telugu Titans and Bengal Warriors gave each other their run for money in the first half but Bengal entered the first-half break with six points advantage over their opponent.

Siddharth clinched valuable raid points in the second half. Bengal defenders also the joined the party and secured an All-Out in the fourth minute of the second half and took the lead.

Maninder had his beast mode well and truly on after the All-Out, single-handedly annihilating the Telugu defence to restore his team's lead.

The Warriors secured their All-Out with under seven minutes left in the game to move to a four-point lead.

Maninder and his teammates then held their nerves in game's dying moments to clinch an important win.