Titans' star raider Siddharth Desai failed to replicate his last year's show as he could only manage to contribute 5 points. 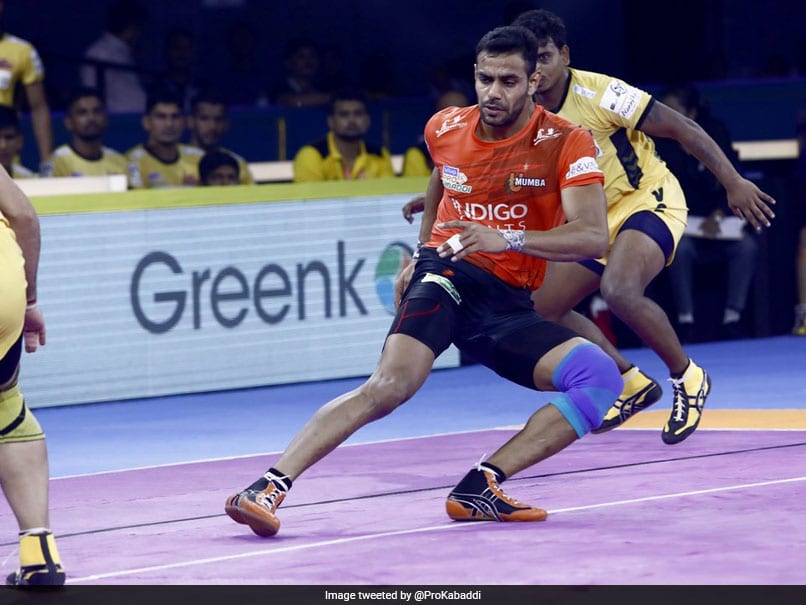 It was not the start that hosts Telugu Titans would have wished for as they lost the opening clash of the Pro Kabaddi League (PKL) Season 7 to U Mumba 25-3I. It was a collective effort from U Mumba as raider Abhishek Singh scored a Super 10 and got equal support from Rohit Baliyan (4 points) and Sandeep Narwal (4 points). Their defenders also supported well with skipper Fazel Atrachali chipping in with 4 points and Srender Narwal with two points. U Mumba also inflicted a couple of all outs.

In the other match, defending champions Bengaluru Bulls made a stunning comeback to pip Patna Pirates 34-32 in their campaign opener in Hyderabad.Defenders Amit Sheoran (5 points) and Ashish Sangwan (4 points) were the main reason for Bengaluru's narrow win. Also, their ace raider Pawan Sehrawat scored nine points. For Patna, skipper Pardeep Narwal scored a Super 10 and Mohammed Maghsoudlou came up with nine points. However, it wasn't enough to help them cross the line.

Titans' star raider Siddharth Desai failed to replicate his last year's show as he could only manage to contribute 5 points while Rajnish was the top scorer with 8 points for Telugu Titans.

The hosts started well with raider Rajnish opening their account with a bonus point before Athul M.S. also successfully raided for U Mumba to make it 1-1 in the opening few minutes of the game. Rohit Baliyan's unsuccessful raid helped the Titans take a one point lead but the visitors then tackled Siddharth Desai to level the score.

Another successful tackle by Abhishek Singh's one point raid helped U Mumba make it 4-2 in the first 5 minutes. The Titans then failed in both the departments of the game as the visitors extended their lead to 8-4 in the next five minutes.

Rajnish then won a couple of points for his team as Titans cut the deficit to 6-8. However, Abhishek scored 2 points and inflicted an all out to extend U Mumba's lead to 12-6. Titans's star raider Siddharth failed yet again as his previous team once again tackled him to make it 13-6. The Titans then made two successful defence attempts to reach 8 points.

On the other hand, Abhishek and Athul kept on fetching points for their team as U Mumba collected 4 raid points in the last five minutes, while the hosts could only manage a couple as the first-half went in U Mumba's favour with the score reading 17-10.

In the second half, both the teams went slow with Abhishek and Rohit scoring points in each of their attempts as U Mumba raced to 21 points while the Titans (12 points) could only manage 2, thanks to successful raids by Rajnish.

U Mumba then inflicted another all out to make it 24-14 in their favour in the 29th minute.

But U Mumba also stepped up as they scored 3 back-to-back tackle points to make it 28-19.

Abhishek then showed his mettle by a 2-pointer raid to take U Mumba to 30 points, leaving the Titans with just two men on mat.

U Mumba skipper Fazel Attrachali then failed to tackle Rakesh Gowda before the home side made a super tackle to reach 22 points. Siddharth then made 3 consecutive raids to take Titans to 25 points, but it wasn't enough as in the dying moments of the game, Rohit fetched a raid point to hand the visitors a 31-25 victory.