Ahead of season 7, the 12 PKL captains seemed confident of their strategies and plans, but at the same time expressed that no team can be taken lightly. 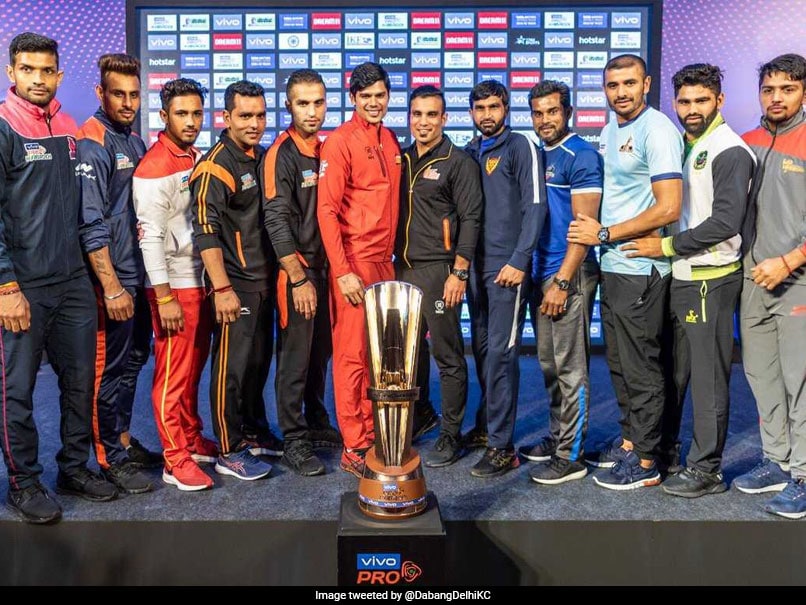 Pro Kabaddi League (PKL) season 7 is all set to begin its seventh season on Saturday.© Twitter

The second most costliest league in country after the Indian Premier League (IPL) -- the Pro Kabaddi League (PKL) -- is all set to begin its seventh season on Saturday. On the eve of the opening match, all the twelve captains of the PKL came together to express their plans and strategies for the seventh season. In an event where defending champions Bengaluru Bulls' captain Rohit Kumar put the trophy back in contest for the new season, the 12 captains seemed confident of their strategies and plans, but at the same time expressed that they can't take any of the teams lightly.

Speaking on the new season, Tamil Thalaivas captain Ajay Thakur said they will prove that they are a much improved team than last season as the franchise have roped in Rahul Chaudhary, the so called 'Raid Machine'.

Thakur said: "Rahul and I have been playing together for Team India for some time now and we share a great chemistry. But this is the first time that both of us will be seen together in PKL. I believe it is going to be great for our fans. I have always believed that hard work pays off and we have been working very hard for the success of our team."

Telugu Titans skipper Abozar Mohajermighani said: "Our team is made up of strong raiders, a formidible defense line and some good coaches. You can call us the strongest team in the competition. Our players are fit and have been practicing continuously for the tournament. We aim to win one match at a time."

Fazel Atrachali, captain of U Mumba, said, "We fought hard last season and we will continue to do the same this year as well. This season we also have youngsters with us who have shown great dedication and promise."

Jaipur Pink Panthers captain Deepak Hooda said: "We have 8 to 9 youngsters in our team this year and the new talent will certainly bring some energy and help the team win matches. We have been practicing very hard and the youngsters have shown the right intent and hard work necessary to play games at this level."

Delhi Dbangg may not have had a great run in the first five seasons of PKL, but they proved their mettle last season and their skipper Joginder Narwal said that they have worked on their weaknesses and this time their performance would get even better.

Joginder said: "Our performance last season was very encouraging, and the team has been training with the same energy and passion for the last one-and-a-half months. Last season, the only place we lacked was our defense and we've worked hard to make sure we don't repeat the same mistakes. Last year, we made it all the way to the semifinal and this year we hope to make it to the final.

Defending champions Bengaluru Bulls' skipper Rohit Kumar said: "All teams are extremely competitive, but I believe Gujarat Fortunegiants and Tamil Thalaivas are our strongest competitors this season. This year we aim to win maximum number of matches and even if we lose, I will hope to lose with the minimum difference. The 45-day long camp has made us train and practice extremely hard and with that intensity we will prepare for the match against Patna Pirates on Saturday."

Meanwhile, newly appointed Puneri Paltan skipper Surjeet Singh said: "We have a very good combination of both senior and young players this season which makes us a very strong team as we have the best of the talent. We have practiced on our skills and techniques to make sure we give our best on the mat."

Gujarat Fortune Giants skipper Sunil Kumar said: "This season, just like last season, we have got a lot of new young talent which we believe will be our secret weapons. They will not only enthrall and surprise the audience but also our opponents on the mat. We are putting all our efforts to make sure we win the final this time."

In the opening fixtures on Saturday, Telugu Titans will lock horns with U Mumba, while Bengaluru Bulls will take on Gujarat Fortune Giants at the Gachibowli Indoor Stadium in Hyderabad.