Mumbai once again turned out a happy hunting ground for the Bengaluru Bulls, who lifted their second PKL title. 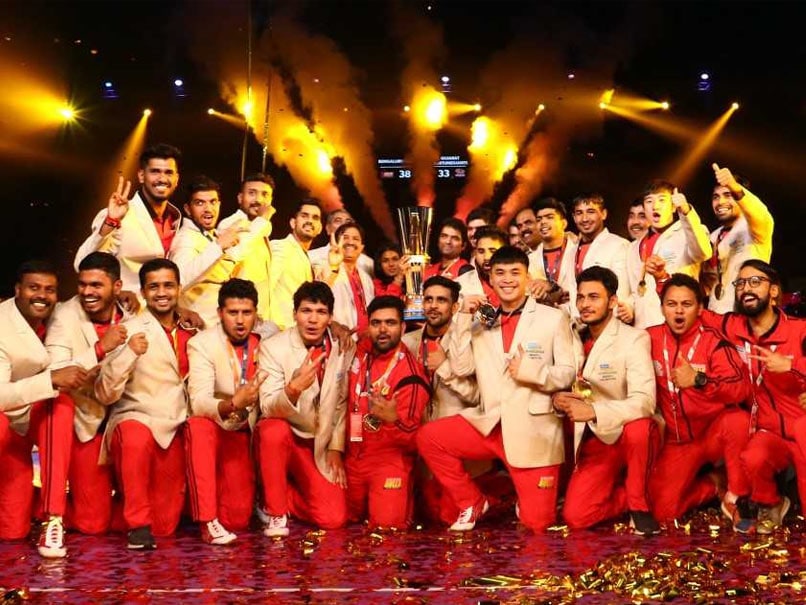 Pawan Sehrawat delivered when it matteredthe most for Bengaluru Bulls.© Pro Kabaddi League

Pawan Sehrawat delivered when it mattered the most as Bengaluru Bulls registered a stunning comeback to edge past Gujarat Fortunegiants 38-33 and lift the Pro Kabaddi League season 6 title in a nail-biting summit clash at the NSCI stadium in Mumbai on Saturday. Gujarat could only blame their Fortunes after squandering a 7-point first-half lead even as Pawan Sehrawat turned out to be the game-changer for the Bulls with his late strikes, scoring 22 raid points while helping his side inflict two all-outs. The stage was set for a mouth-watering contest, with veteran Bollywood actor Anil Kapoor reciting the National Anthem with the silverware glittering in the middle.

Mumbai once again turned out a happy hunting ground for the Bengaluru Bulls, who lifted their second PKL title after having clinched it earlier in the second season, back in 2015 at the same venue.

Despite going neck and neck in the initial part of the first-half, with both teams locked at 6-6 by 9th minute, Gujarat pounced on the hapless Bengaluru side from there on.

Bengaluru were handicapped by the patchy form of their skipper and star raider Rohit Kumar, who failed to score a single raid point in 6 attempts in the first-half.

Gujarat inflicted an all-out in 18th minute which helped them take a 7-point lead by the end of the first-half with the scoreline reading 16-9 in their favour.

Gujarat came back stronger in the second-half by tacking Pawan in the 21st minute before Bengaluru started crawling back with a couple of bonus points and tackles to reduce the margin to 17-21 by the 29th minute.

While Rohit continued to disappoint, star raider Pawan brought the Bulls back into the contest with three raid points to make it 20-21 in the next minute.

Rohit Gulia managed to steal a bonus point for the Gujarat side but a two pointer raid from Pawan help the Bulls inflict their first all-out of the tie and take a slender 23-22 lead for the first time.

But there was more drama in store; with merely six minutes left for the final whistle, both sides went neck and neck at 24-24 by the 35th minute.

Gujarat managed to get their lead of back with a super raid from Rohit Gulia before his namesake in the opposite camp Rohit Kumar finally managed a touch point in his 11th raid to make it 26-27.

Both sides managed to add a couple of points to make it 29-29 in the 37th minute as the contest headed for a nail-biting finish.

Pawan then showed his class, scoring two crucial quick raid points to give Bengaluru the 31-29 lead before piling more misery for Gujarat with an all-out in the dying minutes of the tie.

With that, Bengaluru's lead swelled to 36-30 before they added a couple more to eventually end up 38-33 and all Gujarat could manage thereafter were gloomy faces after failing to take the title in their second consecutive final.