PKL: UP Yoddha Beat U Mumba 34-29 In First Eliminator

Nitesh Kumar collected eight tackle points for the Yoddha's and stopped the U Mumba's raiders from making easy raid attempts. 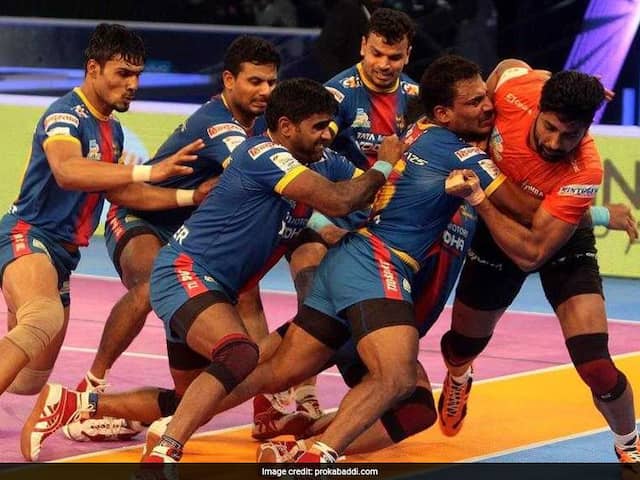 UP Yoddha's defenders displayed a strong performance to cause a major upset.© Pro Kabaddi League

UP Yoddha's defenders displayed a strong performance to cause a major upset as they defeated U Mumba 34-29 in the Pro Kabaddi League (PKL) season six at the Rajiv Gandhi indoor stadium in Cochin on Sunday. Nitesh Kumar collected eight tackle points for the Yoddha's and stopped the U Mumba's raiders from making easy raid attempts. Meanwhile, Srikanth Jadhav picked five points for the Yoddhas. U Mumba's ace raider Siddharth Desai failed to click when it was needed most as he could only manage seven raids while his teammate Rohit Baliyan bought five raid points.

Siddharth opened U Mumba's account with an easy raid but Srikath also responded for the Yoddha's to make the issue 1-1.

Siddharth gave another lead to his side with a successful raid attempt before being tackled by the Yoddha's as the score read 2-2 in the first three minutes.

Both the sides traded raid and tackle points in the next few moments as the score was once again levelled at 5-5 before Siddharth's unsuccessful raid followed by Srikanth's successful raid attempt gave the Yoddha's a marginal 7-5 lead.

Yoddha's then inflicted an all-out to make the score 11-7 in their favour.

Yoddha's rode on some brilliant raid and tackle attempts by their players to extend their lead to 14-10 by the 12th minute.

U Mumba witnessed consecutive failed attempts by its star raider Siddharth however, Darshan Kadiyan stepped up to fetch some points for his side. Some great tackles by the Yoddha's helped them taking a 18-15 lead by the end of first half.

In the second-half, Rishank continued to bring raid points for his side as the Yoddha's were leading 22-17 by the 25th minute.

Srikanth and Siddharth's successful attempts handed one point to their side as the score read 23-18 by the 27th minute.

Srikanth continued to make some stunning raid attempts to help his side take a 26-19 lead with just 10 minutes left.

Darshan's another raid point and a successful tackle of Rishank helped U Mumba cut the deficit to 21-17 by the 32nd minute.

U Mumba then collected three points in quick succession while the Yoddha's fetched two points to make the scoreline read 29-24 by the 35th minute.

U Mumba's raiders and defenders then made some stunning attempts to make the score 28-32 with just two minutes to go.

Yoddha's comfortably picked couple of points in the last five minutes while U Mumba could only bring a single point as the former ran away with an easy 34-29 win.