Prashanth Kumar Rai (8 points) with a two-point raid in the last minute clinched the win for UP Yoddha. 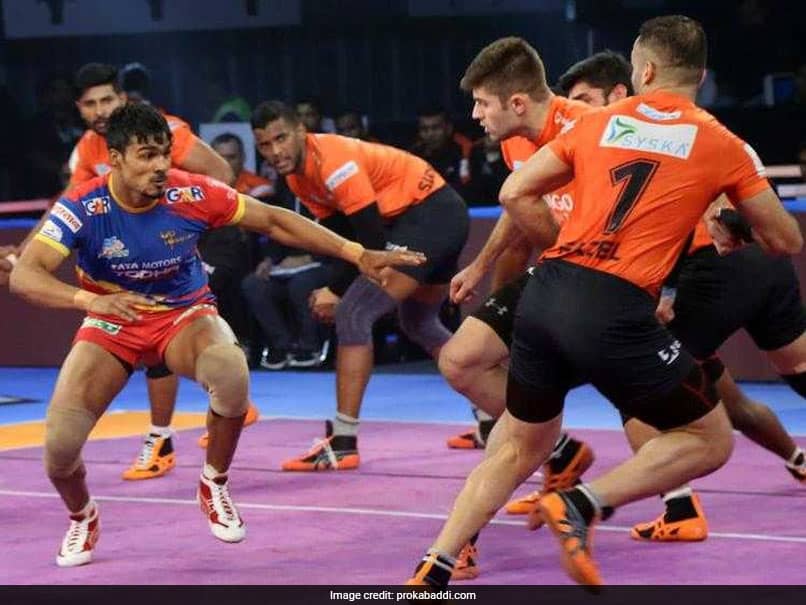 Up Yoddha edged past U Mumba by a slender margin.© Pro Kabaddi League

UP Yoddha edged past U Mumba 34-32 by a slender margin in the Pro Kabaddi League (PKL) tie at the Netaji Subhash Chandra Bose Indoor Stadium here on Saturday. Prashanth Kumar Rai (8 points) with a two-point raid in the last minute clinched the win for UP Yoddha. It was a disappointing night for U Mumba as Siddharth Desai and Rohit Rana both suffered injuries. The loss means that U Mumba won't finish at the top of the table in Zone A.

UP Yoddha still have a slim chance of making it to the playoffs. Sachin Kumar had a brilliant game in defence for Yoddha and earned six tackle points while Rishank Devadiga got seven raid points.

U Mumba made a strong start to lead 3-0 after two minutes but Shrikant Jadhav got two raid points as UP Yoddha cut the deficit to 3-4. U Mumba then forced two super tackles in the space of three minutes to lead 8-5 by the 8th minute.

UP Yoddha forced an all out in the 13th minute as they lead 14-8 after 14 minutes. U Mumba came back strongly with Abolfazl Maghsodlou producing a super raid to level the match 14-14 after 17 minutes.

UP Yoddha didn't buckle under pressure as Prashanth made consecutive two-point raids.

UP began the second half strongly with a super tackle in the 21st minute to lead 20-15. But U Mumba inflicted an all out in the 23rd minute to level the match at 20-20.

For the next 10 minutes it was an evenly contested fight with both teams picking raid and tackle points.

Darshian Kadian forced an error out of Yoddha's defence in the 40th minute to tie the match at 32-32. Prashanth made a brilliant two-point raid in the dying seconds to give Yoddha a narrow 34-32 win.