Watch: Muttiah Muralitharan Furious As Rashid Khan Takes Marco Jansen To The Cleaners In The 20th Over

IPL 2022: Sri Lanka legend Muttiah Muralitharan lost his cool after Marco Jansen was hit for three sixes in the last over by Rashid Khan on Wednesday. 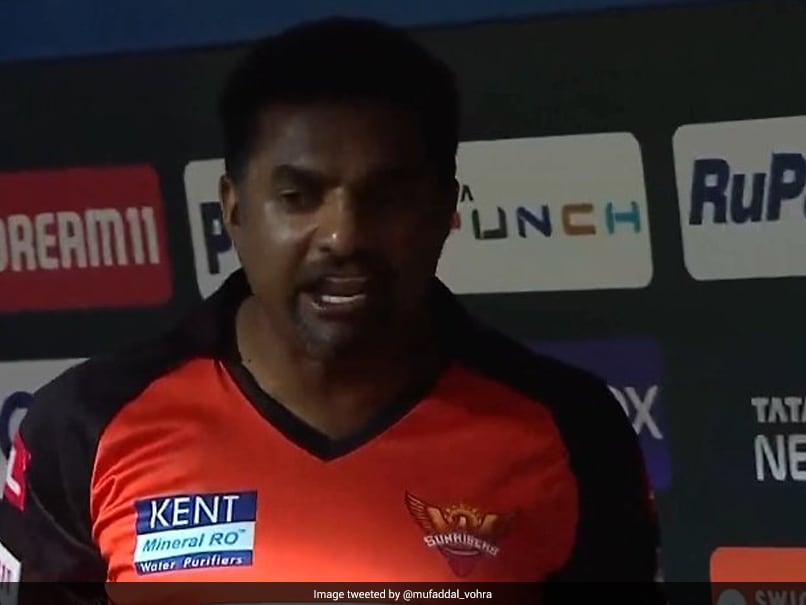 IPL 2022: Muttiah Muralitharan lost his cool after Marco Jansen was hit for three sixes in the last over.© Twitter

Rashid Khan and Rahul Tewatia dominated proceedings in the last over against SunRisers Hyderabad (SRH) pacer Marco Jansen as they gathered 25 runs to win the match for Gujarat Titians (GT) in IPL 2022 at the Wankhede Stadium in Mumbai on Wednesday. Needing 22 runs off the final six deliveries, Jansen was welcomed by a huge six by Tewatia off his first ball. Jansen came back well to give only a single on the second. However, what followed next was complete carnage as Rashid hit three sixes in the following four deliveries to seal a thrilling victory for his team. As Rashid teed off against Jansen, the camera showcased how former Sri Lankan legend Muttiah Muralitharan, SRH's spin bowling coach, seemed agitated and lost his cool.

Watch: Muttiah Muralitharan's livid reaction during the final over

Only tournament in the world that can make Rahul Dravid, MS Dhoni and Muttiah Muralitharan lose their calm.
IPL the great #SRHvsGT #SRHvGT pic.twitter.com/TV8YXHkbd0

His reaction led to some hilarious memes and tweets.

Pure Gold, Once in a lifetime you get to see Muralitharan doing this.

It was such a game where even Muttiah Muralitharan couldn't control his emotions. pic.twitter.com/AHp8nFBjBb

When legends like Rahul Dravid and Muttiah Muralitharan loose their shit ...you know IPL has peaked!

Jansen went for 63 runs in his four overs and was wicketless as SRH bowlers failed to provide the necessary support to Umran Malik, who claimed his maiden IPL 5-wicket haul.

Apart from Malik (5/25), no other bowler stood up to the challenge, especially at the death overs. Even left-arm pacer T Natarajan couldn't get his name in the wickets column and conceded 43 runs in 4 overs.

It was also the first time Natarajan had gone wicket-less in eight matches in IPL 2022.

The win helped GT regain the top spot while SRH find themselves at the third spot for the time being.

SRH are scheduled to play Chennai Super Kings (CSK) on May 1 while GT will face Royal Challengers Bangalore (RCB) on April 30.

Muttiah Muralitharan IPL 2022 Cricket Gujarat Titans vs Sunrisers Hyderabad, Match 40
Get the latest updates on ICC T20 Worldcup 2022, check out the Schedule and Live Score. Like us on Facebook or follow us on Twitter for more sports updates. You can also download the NDTV Cricket app for Android or iOS.