Left-handed batter Tilak Varma was picked up by Mumbai Indians on the second day of the IPL 2022 mega auction for Rs 1.7 crore. 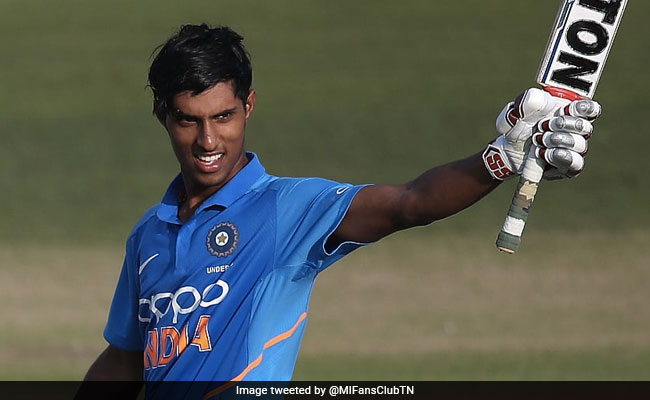 When an electrician father failed to brighten his son's cricketing prospects, in came a coach to take care of all the expenses, and go beyond that. And that's how that nine-year-old boy, once playing in the bylanes of Chandrayangutta in Hyderabad, and possessing an attractive batting stance, cuts and pulls shots, grew into a 19-year-old Tilak Varma, with a Rs 1.7 crore IPL deal. He was picked up by Mumbai Indians on the second day of the IPL 2022 mega auction.

It is not for nothing that Varma attributes his growth as a cricketer to his coach Salam Bayash, who provided him the necessary grooming, gave him food, and when required, a place to stay in his own house where five other family members lived.

His father Namboori Nagaraju could hardly afford to send Varma to a cricket academy and buy him the gears, but Salam "took care of his expenses".

"Mere baarein mein bhale hi na likho, but coach sir ka zaroor mention karna (It's okay not to write about me but definitely do highlight Salam sir)," Varma told PTI after being bought by the record five-time champions.

"He bought me the cricketing gears and took care of most of the expenses (at Legala Cricket Academy). So it's all because of him and my family's support I'm here," he added.

Living in a rented house, Varma's four-member family was hit hard financially during the COVID-19 pandemic as his father stopped getting new contracts during the lockdowns, but his cricket did not suffer, thanks to his coach's "unrelenting support".

"There was a lot of suffering and we had to cut down our expenses during the pandemic. But my coach ensured that I continued playing cricket. Hopefully things will turn better now." Varma, who had a base price of Rs 20 lakh, generated huge interest among the franchises and led to an intense bidding between Sunrisers Hyderabad, Rajasthan Royals, Chennai Super Kings before the Rohit Sharma-led side breached the Rs one-crore mark for the young left-hander, who also bowls off-spin.

Currently in Cuttack with the Hyderabad Ranji Trophy squad for their upcoming league matches, Varma said he had never expected such a "big price deal".

"I was confident of playing IPL but never expected to get this price-tag. It's a dream come true for me to play with a team I always loved. It will give me a perfect opportunity to learn and hone my skills, playing alongside the greats." In his coach's words, Varma has a long way to go and Mumbai Indians is the perfect launchpad for him.

"I can't be happier, it's the result of his patience and perseverance. It's been a long journey of hardwork for us. Mumbai is a big franchise and have produced many players like Jasprit Bumrah, Hardik Pandya and I hope Tilak goes a long way too," Salam said from Hyderabad.

The coach said Varma prefers to bat at No. 3 but he's flexible and loves playing the finisher's role.

"I just hope he gets a couple of opportunities and then he will surely cement his place. He has the perfect cricketing shots and also has a patient mind. It works perfectly for him in finishing the games.

"Also, he is very serious about his off-spin and it comes handy during crunch situations," the coach said about his favourite ward.

Varma's cricketing journey started about 10 years ago when he was playing in the old city's bylanes. That's when the coach convinced his parents to take him to Legala Cricket Academy near Lingampalli Station.

"It was during 2011-12 and this boy attracted me with his stance and the attractive cut and pull shots. I immediately convinced his family and was ready to invest on the boy, I knew he has a future in cricket," Salam added.

Varma made his Ranji Trophy debut against Andhra three years ago. He also played for India in the U-19 World Cup in 2020 when the team finished runners-up to Bangladesh, scoring 38 and 48 in two games.

He was on a roll in the Vijay Hazare Trophy domestic one-dayers, scoring 180 runs in five matches and taking four wickets.

He was also impressive in the Syed Mushtaq Ali domestic T20s, compiling 215 runs in seven games at a strike rate of 147.26.

Mumbai Indians IPL Auction 2022 Cricket
Get the latest updates on Fifa Worldcup 2022 and check out  Fifa World Cup Schedule, Stats and Live Cricket Score. Like us on Facebook or follow us on Twitter for more sports updates. You can also download the NDTV Cricket app for Android or iOS.