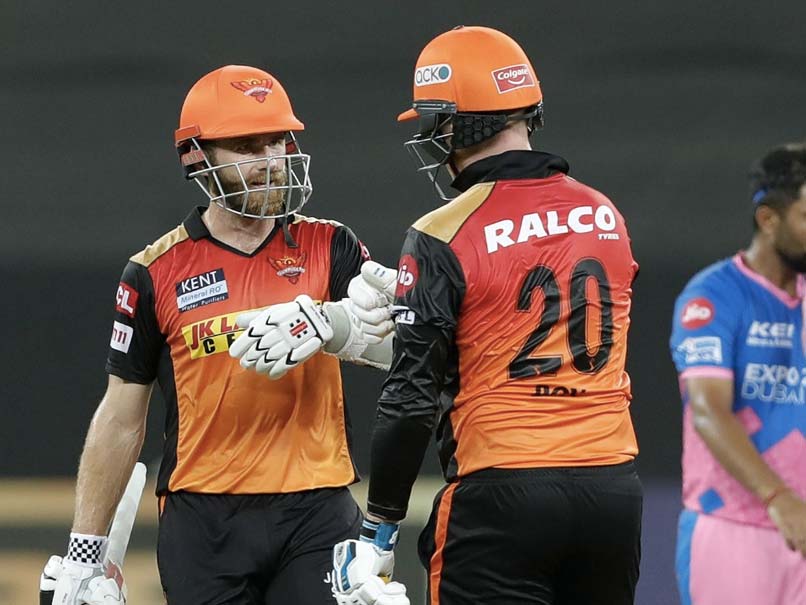 Opener Jason Roy and skipper Kane Williamson struck confident half-centuries to shape Sunrisers Hyderabad's comfortable seven-wicket win over Rajasthan Royals as IPL Play-offs calculations got a bit more complicated on Monday. Opting to bat, the Royals scored 164 for six on the back of a well-calculated 82-run knock by skipper Sanju Samson on a sticky wicket where stroke-making was difficult. However, the score proved insufficient as Roy (60 off 42) and Williamson (51 not out)-led the team to their only second win of the season.

Now four teams -- Kolkata Knight Riders, Punjab Kings, Royals and Mumbai Indians -- are tied on eight points each and all are alive in the play-offs race in which Chennai Super Kings and Delhi Capitals are firm favourites for the top two places with 16 points each. Chasing 165, Roy, playing his first match for Sunrisers, and Wriddhiman Saha (18 off 11) raced to 57 for no loss. The two plundered 18 runs of the fifth over, bowled by Chris Morris, that included four boundaries. The fine partnership was broken by spinner Mahipal Lomror (1/22).

Williamson and Roy, without taking much risk, continued to milk runs to take Sunrisers to 90 for one in 10 overs. Roy was dropped on 55 by Yashasvi Jasiwal off Rahul Tewatia but was caught off rookie pacer Chetan Sakaria (1/32) soon after. Priyam Garg (0) got out on the first ball as the Royals seem to be making a comeback. But Williamson and young Abhishek Sharma (21) then led the side over the line.

Earlier, Samson produced his second consecutive fifty after conjuring up an unbeaten 70 against Delhi Capitals on Saturday. The captain sent the ball seven times to the fence and three times over it in his impressive 57-ball innings, with which he became the leading run-scorer (433) of the season, surpassing Delhi Capitals' Shikhar Dhawan (430).

Jaiswal (36) and Mahipal Lomror (29 not out), were the other two batters to provide valuable contributions on a wicket where the ball did not come on to the bat easily for a major part of Royals innings.

Asked to bowl, pace spearhead Bhuvneshwar Kumar (1/28) bowled a splendid length ball, on leg stump which worked perfectly for SRH as the dangerous Evin Lewis (6) hit straight to Abdul Samad at deep backward square leg in the second over. Despite snaring Lewis' wicket early, the Sunrisers bowlers were guilty of bowling wide and short and Jaiswal took the opportunity to counterattack. The youngster, who smashed four boundaries and a six, played some splendid shots with skipper Samson also slowly finding his feet as the two collected 46 runs in the Powerplay. The duo went on to share a 56-run stand before Sandeep Sharma (1/30) got rid of Jaiswal, who had hit a stunning six just a ball earlier.

To keep the pressure on the Royals, SRH skipper Kane Williamson brought in star Afghan leg-spinner Rashid Khan (1/31) back into the attack and a mis-hit by Liam Livingstone (4) meant the move was met with the desired result.

With Lomror playing second fiddle to perfection, Samson took over the proceedings. But Siddharth Kaul (2/36) bowled a great last over, dismissing Samson and Riyan Parag (0) to restrict the Royals to 164 after being hit for 20 runs in his third over.

Sanju Samson IPL 2021 Sunrisers Hyderabad vs Rajasthan Royals, Match 40 Cricket
Get the latest updates on ICC T20 Worldcup 2022 and CWG 2022 check out the Schedule, Live Score and Medals Tally. Like us on Facebook or follow us on Twitter for more sports updates. You can also download the NDTV Cricket app for Android or iOS.