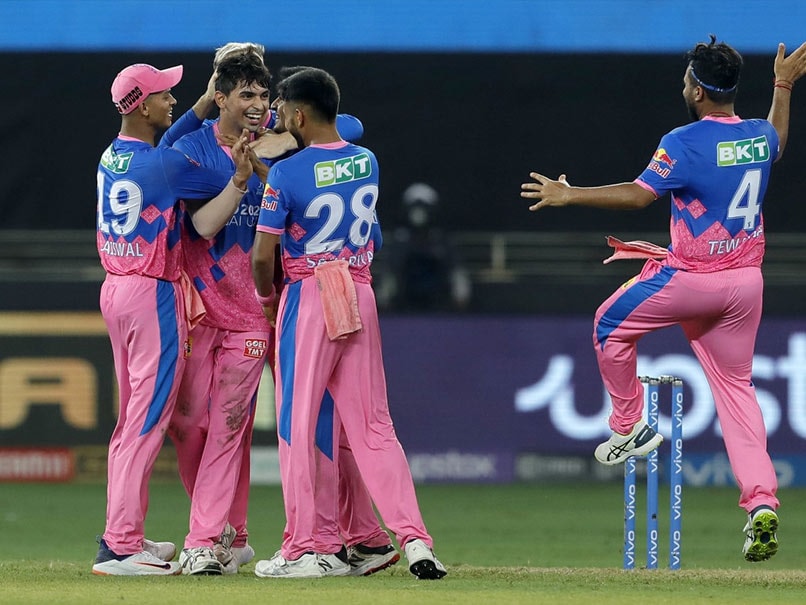 IPL 2021: Kartik Tyagi gave away just one run in the finals over vs Punjab Kings.© BCCI/IPL

Fast bowler Kartik Tyagi bowled a sensational last over as Rajasthan Royals pulled off an incredible two-run win over Punjab Kings in an Indian Premier League (IPL) thriller on Tuesday. Punjab required four runs off the last six balls but Tyagi dismissed Nicholas Pooran (32) and Deepak Hooda (0) and gave away only one run to snatch the win for his team from the jaws of defeat. Punjab ended their innings at 183 for four, chasing 186 to win. Sanju Samson's side was seemingly down and out when KXIP opening pair Mayank Agarwal (67) and KL Rahul (49) put on 120 runs in 11.5 overs.

With Aiden Markram (26 not out) and Nicholas Pooran (32) going strong, it looked like it would be only a matter of time when Punjab would wrap up the match.

But in the end, Punjab made a mess in the last over to suffer their sixth defeat from nine matches. With this win, the Royals moved to the fifth spot after four wins from eight matches.

Earlier, the 22-year-old Arshdeep Singh (5/32) complemented his senior pro Mohammed Shami (3/21) well as the duo shared eight wickets to help Punjab bowl out Rajasthan for 185 in exactly 20 overs after they were going strong at 169 for 5 in 17 overs. Opener Yashasvi Jaiswal (49) and Mahipal Lomror (43) scored bulk of the runs for Rajasthan.

Chasing the total, Mayank and KL Rahul looked in good touch. KL Rahul, who was dropped thrice, smashed 4 fours and 2 sixes in his 33-ball innings. He also crossed 3000 IPL runs during his knock.

Mayank too produced seven hits to the fence and also clobbered two sixes in his 43-ball knock. Once the Punjab skipper was caught off Chetan Sakariya (1/31) in 12th over, Agarwal too was removed by Rahul Tewatia (1/23). Markram and Pooran then played some delightful shots to keep their chase on track before they were undone by a brilliant last-over by Tyagi.

Earlier, opener Jaiswal was part of two vital partnerships, adding 54 with his new opening partner Evin Lewis (36) and then sharing another 48 off 28 balls with Liam Livingstone (25). Lomror then smashed his way to a 17-ball 43, studded with four sixes and two fours.

However, in the last three overs, Shami claimed three wickets and Arshdeep completed his five-for to wrap up the RR innings.

Put in to bat, Jaiswal and Lewis gave RR a flying start with the former smashing two successive fours off Shami in the first over and the latter smacking Ishan Porel, also playing his first match, for a six.

The West Indies batsman punished Porel for bowling short and wide, blasting four boundaries in the fourth over. Deepak Hooda was then taken to the cleaners as he bled 13 runs.

Arshdeep then produced the breakthrough, deceiving Lewis with a slower ball as Mayank Agarwal took a fine low catch as RR were 57 for one after the powerplay.

Jaiswal then reverse swept England spinner Adil Rashid for a six, before depositing him over long off for another maximum. RR skipper Sanju Samson failed to make any impact as a terrific one-handed catch by KL Rahul ended his stay and gave Porel his maiden wicket. Livingstone then joined Jaiswal, who picked up another maximum off Rashid in the 9th over. Jasiwal raised the team hundred with another four off Harpreet Brar in the 11th over. Livingstone also tried to match his partner as he scooped one fine over KL Rahul and then smacked one over mid-wicket off Arshdeep.

A sensational catch at deep midwicket by Fabian Allen sent Livingstone back to the hut with RR slipping to 116 for 3. Jaiswal couldn't complete his fifty as his leading edge was held on to by Mayank at short cover. New man Lomror then went on a six-hitting spree, blasting two maximums off Rashid before sending Hooda for a couple more in the 16th over as RR crossed the 150-mark.

Lomror also smashed two fours as Hooda conceded 24 runs off his second over. However, RR lost the plot after that as Shami and Arshdeep restricted their opponent to a competitive score in the end.

Punjab Kings Kartik Tyagi IPL 2021 Punjab Kings vs Rajasthan Royals, Match 32 Cricket
Get the latest updates on IPL Auction 2023 and check out  IPL 2023 and Live Cricket Score. Like us on Facebook or follow us on Twitter for more sports updates. You can also download the NDTV Cricket app for Android or iOS.