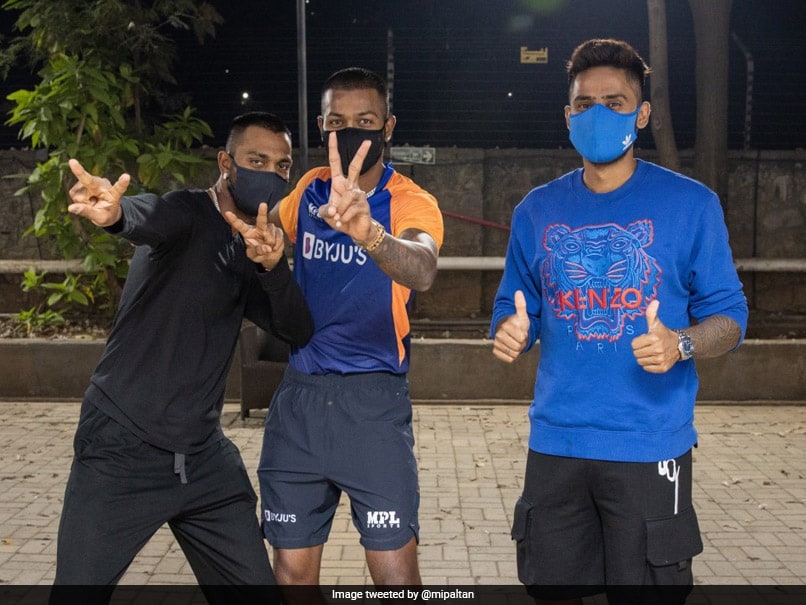 After India sealed a 2-1 win against England in the ODI series, Hardik and Krunal Pandya with Suryakumar Yadav have joined the Mumbai Indians (MI) squad in their bio-secure bubble ahead of IPL 2021. MI also took to Twitter to share a video with fans, which showed the trio arriving in the team's bio-secure bubble. Since they arrived from another bio-secure bubble, they won't have to undergo quarantine. The trio played key roles for India in the T20I and ODI series against England.

Pune Mumbai and our boys have arrived at the @RenaissanceMum!

Mumbai Indians even shared a few photos on Twitter of the trio posing for photos in the team's bio-secure bubble.

The boys have come home!

The Pandya brothers featured for India in the three-match ODI series, with Krunal slamming a record debut half-century. Krunal was in tears after his knock, dedicating it to his father, who died recently. Meanwhile, Suryakumar was a substitute in the series, but made his debut in the T20I series, which India won in Ahmedabad.

Suryakumar also slammed a half-century during the T20I series.

Mumbai, who are the defending champions, will be aiming to put on a good show in IPL 2021. They face Royal Challengers Bangalore (RCB) in the season opener, on April 9 in Chennai. During the IPL 2021 Auction, MI roped in Adam Milne, Nathan Coulter-Nile, Piyush Chawla, James Neesham, Yudhvir Singh, Marco Jensen and Arjun Tendulkar.

Hardik Pandya Krunal Pandya Suryakumar Yadav IPL 2021 India vs England 2020-21 Cricket
Get the latest updates on SA vs IND 2021-22, check out the Schedule and Live Score . Like us on Facebook or follow us on Twitter for more sports updates. You can also download the NDTV Cricket app for Android or iOS.