IPL 2021, CSK vs MI, Mumbai Indians Predicted XI: Rohit Sharma Has All The Aces Up His Sleeve 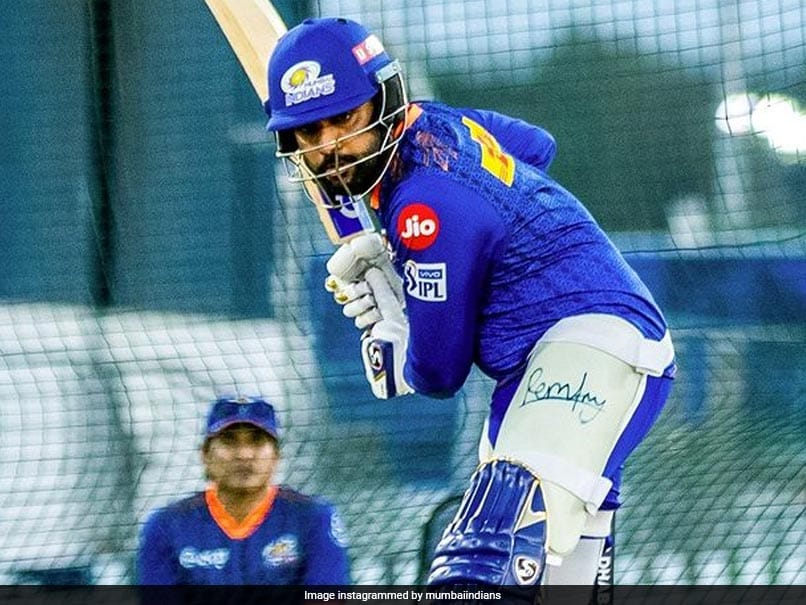 Mumbai Indians resume their title defence with a tricky test against MS Dhoni's Chennai Super Kings in Indian Premier League's UAE leg opener on Sunday. Mumbai Indians are fourth in the IPL points table with eight points from seven games. A win will see them go level on points with second-placed CSK, who have so far won five of their seven matches in IPL 2021. The good news for Mumbai Indians is that the big guns look to be ready for the tournament's resumption. The fitness of captain Rohit Sharma, key batsman Suryakumar Yadav and star pacer Jasprit Bumrah would be a slight concern with their mandatory quarantine ending only on Thursday.

But with a couple of days of training sessions under their belt, the trio look primed to hit the ground running.

Here is how we think Mumbai Indians could line up against Chennai Super Kings:

1) Rohit Sharma: The Mumbai Indians skipper was in top form in the recently-concluded Test series in England and was the top-scorer for India in the four Tests. Rohit scored 368 runs at an average of 52.57 with a century and two fifties to his name.

The stylish opener, though, will need to quickly get his mindset back to the breakneck speed of the T20 format, and with all the experience he possesses that should not be too much of a problem.

2) Quinton de Kock: The South African wicketkeeper-batsman has been a key component of the Mumbai Indians well-oiled machine in the past couple of seasons. He has been an able partner for Rohit, even outshining him on many occasions. However, De Kock was not at his best during the first phase of IPL 2021 in India, scoring 155 runs in six games at a strike-rate of 117.52.

3) Suryakumar Yadav: His performances for Mumbai Indians over the years has put Suryakumar Yadav in contention for a spot in the India playing XI at the T20 World Cup. For MI, the right-hander has been Mr. Consistent, chipping in with the runs when the other big guns have failed to fire.

Suryakumar made an iffy start to the IPL 2021 season, scoring 173 runs in seven matches at an average of 24.71. MI will expect more from him in the UAE.

4) Ishan Kishan:Another player who has blossomed under the captaincy of Rohit Sharma, Ishan Kishan's hitting prowess has become essential to MI's cause. The youngster recently made his bow in ODI cricket with India's tour of Sri Lanka, scoring a half-century on debut. The 23-year-old, though, had a tumultuous time with the bat during the India leg of IPL 2021, scoring just 73 runs in five matches.

5) Kieron Pollard: The big-hitting West Indian has time and again won matches for Mumbai Indians almost single-handedly. His power-hitting and experience on the field makes him indispensable. That was clear to see when Pollard produced one of the innings of the tournament, earlier this year, to give MI the unlikeliest of wins against CSK.

6) Hardik Pandya: The younger of the two Pandya brothers, Hardik has been dogged by injuries this year. Hardik didn't have the best of times during his comeback series for India in Sri Lanka, failing to make an impact in 3 ODIs and the one T20I match that he played in.

7) Krunal Pandya: The 30-year-old has been making steady strides over the years that has seen him earn a place in the India limited-overs squad. The all-rounder, though, was struck down by Covid in Sri Lanka, and will be looking to make his mark in the UAE.

8) Nathan Coulter-Nile: The Australian pacer brings with him a bagful of experience and some exceptional variations at the death. Coulter-Nile player just one match for MI in IPL 2021 in India, failing to make an impression. He went wicketless and gave away 35 runs from his four overs.

9) Rahul Chahar: The young leg-spinner has made giant strides in recent times, which has put him in the reckoning for a place in the Indian team. He was named in the 15-member India squad for the T20 World Cup 2021 and will look to justify his place with some fine performances.

10) Trent Boult: New Zealand's ace pacer has become an integral part of the MI setup. He has formed a deadly combination with Jasprit Bumrah with the new ball and is just as effective at the death. Boult made a brilliant start to IPL 2021, taking seven wickets in as many matches.

11) Jasprit Bumrah: India's premier pacer and Rohit Sharma's go-to death bowler, Bumrah will once again lead MI's bowling attack. He arrives in the UAE at the back of some fine performances in England and the 27-year-old will now look to get back to his T20 rhythm.