IPL 2021: CSK spinners turned the game on its head with five wickets in less than four overs to power a remarkable RR collapse, giving CSK their second win of the tournament by 45 runs. 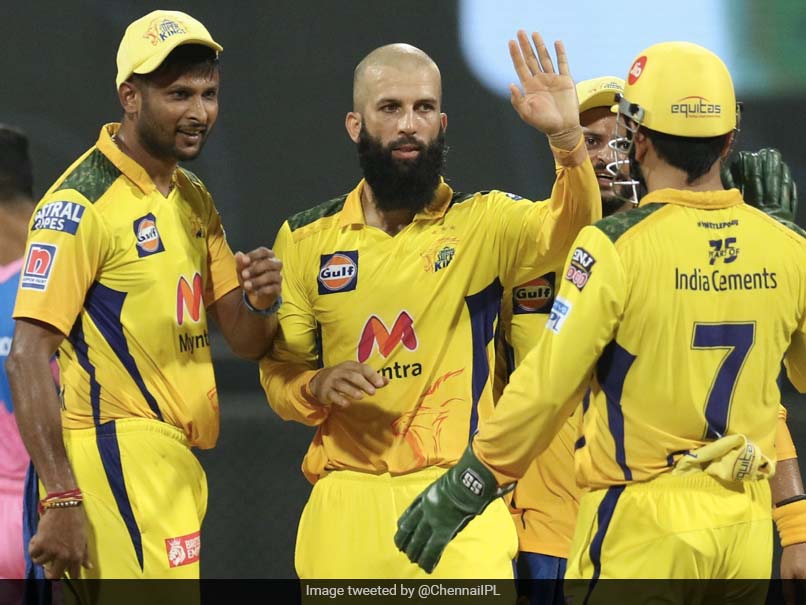 Dwayne Bravo (20 not out off 8), Ambati Raydu (27 off 17) and Ali (26 off 20) helped Chennai Super Kings (CSK) post 188 for nine after being put in to bat in Match 5 of the Indian Premier League (IPL) 2021. Rajasthan Royals (RR) made a promising start in the run-chase courtesy Jos Buttler (49 off 35) before the batsmen succumbed to the spinners on the Wankhede pitch which offered more turn than earlier games. CSK won the game by 45 runs after RR's innings ended at 143 for nine. Moeen Ali(3/7 in 3 overs) picked up three wickets in quick succession to effectively seal the game for his team after Ravindra Jadeja (2/28 in 4) provided the crucial breakthrough by castling Buttler with a classical away turning delivery.

One of the best fielders around, Jadeja also took four catches. It was another emphatic win for CSK after they outplayed Punjab Kings (PBKS) while RR suffered their second loss in three games.

Earlier, CSK lost wickets towards the end with the batsmen going for big hits and also in the face of some good bowling by RR. Dwayne Bravo smashed a huge six off the last ball of the innings from Mustafizur Rahman (1/37) to ensure the CSK got close to 190.

Faf Du Plessis top scored with 33 as the CSK batsmen got starts but couldn't capitalise on them after. young Chetan Sakariya (3/36 from 4) was the best bowler for RR while Chris Morris finished with 2/33 despite conceding 15 runs in his final over.

MS Dhoni, in his 200th match as CSK captain, came in to bat at No.7 but could not get going as quickly as he would have liked. He, however, managed two boundaries in his 17-ball 18 before being beaten by an off-cutter by Sakariya only to give a catch to Jos Buttler. He survived a run-out chance and a few anxious moments in his brief knock.

Ambati Rayudu and Suresh Raina (18, 15 balls, 1 four, 1 six) added 45 runs in quick time for the fourth wicket before the former perished going for an attacking shot on the off-side off Sakariya.

Sakariya struck again a few balls later, getting Raina to hit one straight to Morris at mid-off as CSK slipped to 125 for fice in the 15th over.

Rayudu hit sixes off successive deliveries in Tewatia's second over, scoring 14 runs as he and Raina attempted to take advantage of the fifth and sixth bowlers (Tewatia and Riyan Parag) employed by Royals skipper Samson.

Tewatia had begun well by conceding only five runs in his opening over and got ride of Moeen Ali (26 off 20). Opener Ruturaj Gaikwad's struggles continued as his attempt to hit his way out saw him miscue a pull only to see it lob to Shivam Dube off Rahman.

He fell for 10 (13 balls, 1 four) after adding 25 runs for the first wicket with fellow opener du Plessis. The South African showed intent and waded into Jaydev Unadkat in the fifth over, hammering three fours and one six before an ambitious shot brought his downfall off Morris' bowling.

Jos Buttler
Get the latest updates on ICC T20 Worldcup 2022 and CWG 2022 check out the Schedule, Live Score and Medals Tally. Like us on Facebook or follow us on Twitter for more sports updates. You can also download the NDTV Cricket app for Android or iOS.