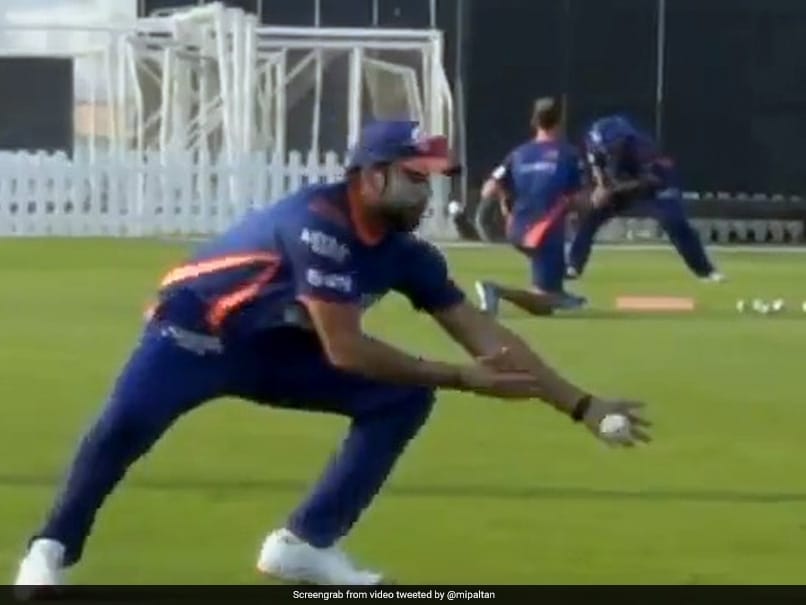 Rohit Sharma completed a one-handed catch, holding on to the ball despite being thrown off-balance.© Twitter

Rohit Sharma completed a diving, one-handed catch during a Mumbai Indians (MI) training session, the video of which was shared by the franchise's official Twitter handle. Rohit executed two simple catches, before moving to his left to complete a one-handed catch, holding on to the ball despite being thrown off-balance due to the momentum. "Just another one-handed Rohit Sharma stunner in the slip cordon. #OneFamily #MumbaiIndians #MI #Dream11IPL @ImRo45," read the caption of MI's post.

Here's the video of the catch by the MI skipper:

Mumbai Indians are the defending champions ahead of the 13th edition of the Indian Premier League (IPL).

The franchise will miss out on the services of pacer Lasith Malinga, who has pulled out of the tournament due to personal reasons. Australian fast-bowler James Pattinson has replaced Malinga in the squad.

MI will start their league campaign on the opening day of IPL 2020 (September 19), taking on Chennai Super Kings (CSK) in Abu Dhabi.

This will be followed by a match against Kolkata Knight Riders (KKR) in the same city, on September 23.

This year all the matches will take place in the United Arab Emirates (UAE), due to the rising COVID-19 cases in India. The games will be played across three venues: Sharjah, Abu Dhabi and Dubai.

The effect of the coronavirus has been felt by the IPL teams in the UAE as well, with players from CSK testing positive.

Delhi Capitals (DC) had further released a statement revealing that their assistant physiotherapist has tested positive for the deadly virus.

Rohit Sharma IPL 2020 Cricket
Get the latest updates on ICC Women's Cricket World Cup 2022 and IPL 2022, check out the Schedule , Live Score and IPL Points Table. Like us on Facebook or follow us on Twitter for more sports updates. You can also download the NDTV Cricket app for Android or iOS.