IPL 2020 Qualifier 2, DC vs SRH: After Delhi Capitals' win, Marcus Stoinis was spotted carrying a Hulk action figure and then went on to explain why. 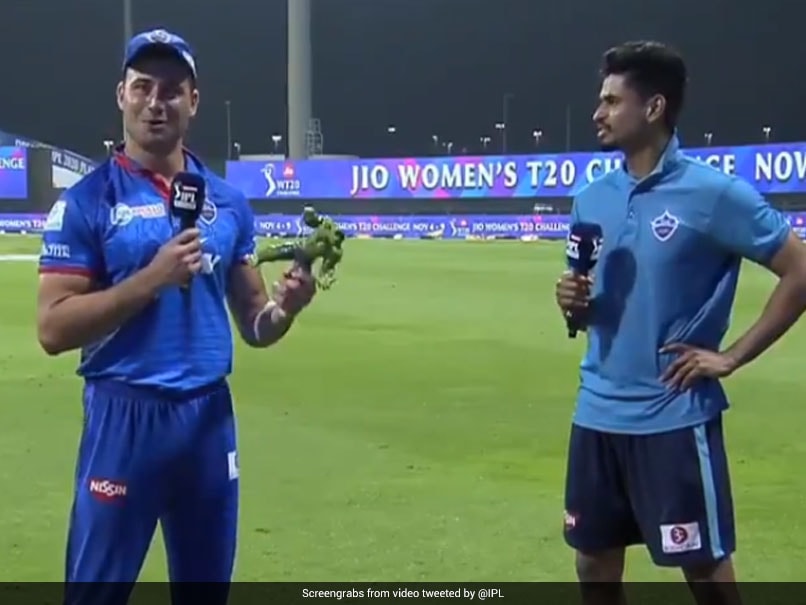 Delhi Capitals all-rounder Marcus Stoinis had a memorable night with both bat and ball as his side defeated SunRisers Hyderabad by 17 runs in IPL 2020 Qualifier 2to reach the final for the first time in history. Stoinis scored 38 runs and also picked up three wickets and was awarded Player of the Mach for his all-round performance. After his side's win, Stoinis was spotted carrying a Hulk miniature -- a fictional character from Marvel Universe. Delhi Capitals skipper Shreyas Iyer, after the game, asked Stoinis what does it symbolise to him and he revealed the mystery, giving a funny reply. "Apparently that's what I am looking like when I celebrate my wickets," Stoinis can be heard telling Iyer in a video posted on IPL Twitter handle. The video ends with Shreyas Iyer doing a fun impersonation of Stoinis' walking style.

Meet The Hulk - Marcus Stoinis@MStoinis reveals the mystery behind the Hulk action figure, his pumped up celebrations & his all-round show against #SRH. DO NOT MISS - Captain @ShreyasIyer15 doing a fun Stoinis impersonation

Sharing a link of the whole conversation between the two, IPL tweeted: "Meet The Hulk - Marcus Stoinis. @MStoinis reveals the mystery behind the Hulk action figure, his pumped up celebrations & his all-round show against #SRH. DO NOT MISS - Captain @ShreyasIyer15 doing a fun Stoinis impersonation".

Delhi had exited the tournament at the same stage last year and their players came out in this match with a fearless approach. The team management sent Stoinis to open the innings alongside Shikhar Dhawan and the Australian all-rounder got Delhi off to a flying start, scoring 38 off 27 balls with the help of five fours and one maximum.

Apart from his batting, Stoinis also starred with the ball, taking key wickets of Manish Pandey and SRH top-scorer Kane Williamson to turn the tide in his side's favour.

With Williamson and young Abdul Samad going hard at DC bowlers, the game was well poised but Stoinis provided Delhi with the most important breakthrough, dismissing the New Zealand skipper in the 17th over.

He was the second most successful bowler for Delhi on the night behind pace spearhead Kagiso Rabada, returning with figures of 3 for 26 from his three overs.

Marcus Stoinis IPL 2020 Cricket Delhi Capitals vs Sunrisers Hyderabad, Qualifier 2
Get the latest updates on IPL Auction 2023 and check out  IPL 2023 and Live Cricket Score. Like us on Facebook or follow us on Twitter for more sports updates. You can also download the NDTV Cricket app for Android or iOS.