IPL 2020, CSK vs SRH: Chennai Super Kings crashed to their third consecutive defeat after failing to chase 165 runs against SunRisers Hyderabad at the Dubai International Stadium. 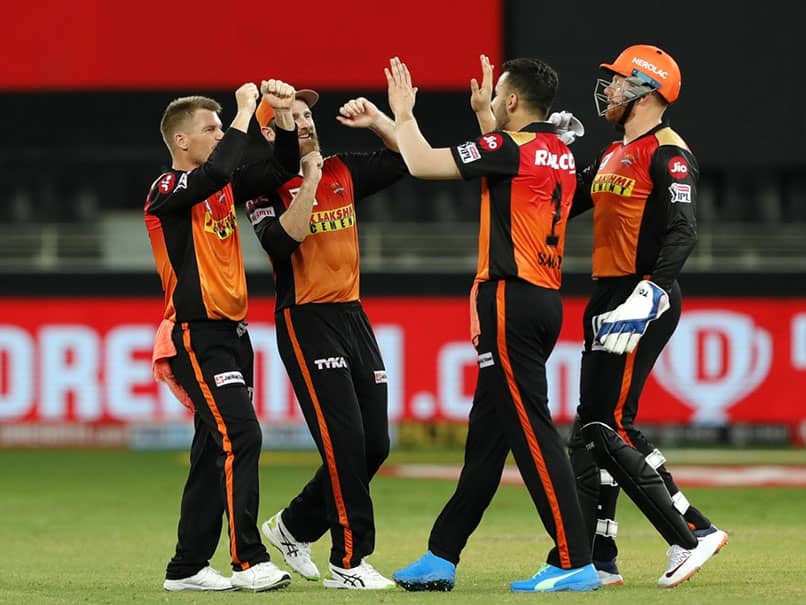 IPL 2020, CSK vs SRH: SunRisers Hyderabad celebrate a dismissal in their win© BCCI/IPL

SunRisers Hyderabad (SRH) defeated Chennai Super Kings (CSK) by seven runs in their Indian Premier League (IPL) 2020 match, at the Dubai International Stadium on Friday. Priyam Garg scored his maiden IPL half-century while bowlers held their nerves against a star-studded CSK batting line-up. T Natarajan was the pick of the bowlers for SRH, picking up two wickets while Rashid Khan dried out the runs as he gave away just 12 runs from his four overs. After the defeat, CSK are staring down the barrel early in the tournament and the last year's runners up sit at the bottom of the points table while SRH move up to fourth spot.

Earlier, SRH won the toss and got off to a horrendous start after Jonny Bairstow lost his wicket without troubling the scorers.

Warner was sent back to pavilion by Piyush Chawla, and Shardul Thakur accounted for the wicket of Pandey.

Kane Williamson couldn't build on his good batting form from the last match, and could only muster nine runs from 13 deliveries.

Garg revived the innings for SRH, grabbing a maiden IPL half-century. The former India U-19 captain scored 51-runs off 26 deliveries, packed with six fours and one six.

Abhishek Sharma gave him able support in the middle, with 31 runs off 24 balls. He was dismissed by Chahar.

CSK began their run chase in an erratic way, losing the wicket of Shane Watson early on.

Faf du Plessis once again attempted to anchor CSK's innings, but came crashing down after Garg got his wicket via a run out. The South African scored 22-runs off 19 balls.

Ambati Rayudu also couldn't mark his return on a good note, falling to Natarajan after scoring only eight runs.

Dhoni attempted to revitalize his side's chase, and received support from Ravindra Jadeja, who grabbed his maiden IPL half-century before getting dismissed by Natarajan. Jadeja scored 50-runs, and grabbed five fours and two sixes.

Dhoni remained unbeaten on 47 runs from 36 balls, and Sam Curran came at the end to hit 15 from five deliveries. But the duo's powerful finish wasn't enough to prevent a defeat.