IPL 2020: Rajasthan Royals (RR) gave glimpses of their camp in Dubai to fans via a video on social media. 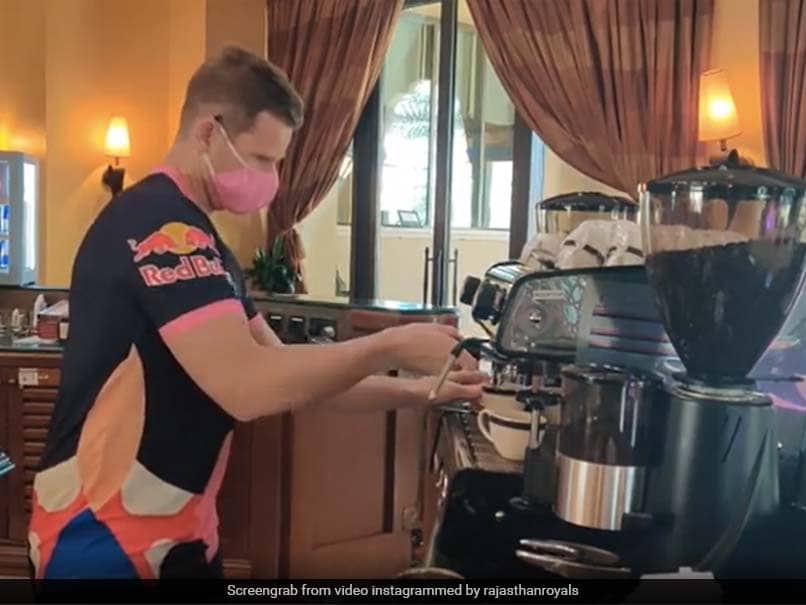 IPL 2020: In the video, Steve Smith can be seen preparing coffee in the team's bio-secure bubble© Instagram

Rajasthan Royals (RR) are currently fifth in the Indian Premier League (IPL) table after four matches. The Steve Smith-led side have registered two wins and two defeats. Ahead of their upcoming fixture against Mumbai Indians (MI) on October 6, the Royals have shared a video on their Instagram handle, following the trend of other teams in giving a sneak peek of their bio-secure bubble for their fans. The video has been captioned as, "Royals at OORM, Dubai Glimpses of the team's home away from home this season. A Royal experience every step of the way. #HallaBol #RoyalsFamily #OORoyalMirage @ooroyalmirage".

Glimpses of the team's home away from home this season. A Royal experience every step of the way. #HallaBol #RoyalsFamily #OORoyalMirage @ooroyalmirage

In the bubble, the cricketers can be seen training around the premises like using the treadmill, gym or doing stretching exercises in the lush lawns. The players are also shown indulging in recreational activities like table tennis and billiards. Smith is also shown making coffee.

The bubble also includes play stations. There are also tennis courts, where Javdev Unadkat is shown playing with his teammates.

Some parts of the footage have also been shot aerially, giving a clear picture of the posh and stylish accommodations. The players also visit the beach, taking part in water activities and beach volleyball.

RR began their campaign with a 16-run win against Chennai Super Kings (CSK), followed by a four-wicket victory over Kings XI Punjab (KXIP). The winning start came to an end with a 37-run defeat to Kolkata Knight Riders (KKR) and an 8-wicket loss to Royal Challengers Bangalore (RCB).

Jaydev Unadkat IPL 2020 Cricket
Get the latest updates on India vs England Series, India vs England , live score and IPL 2021 Auction . Like us on Facebook or follow us on Twitter for more sports updates. You can also download the NDTV Cricket app for Android or iOS.