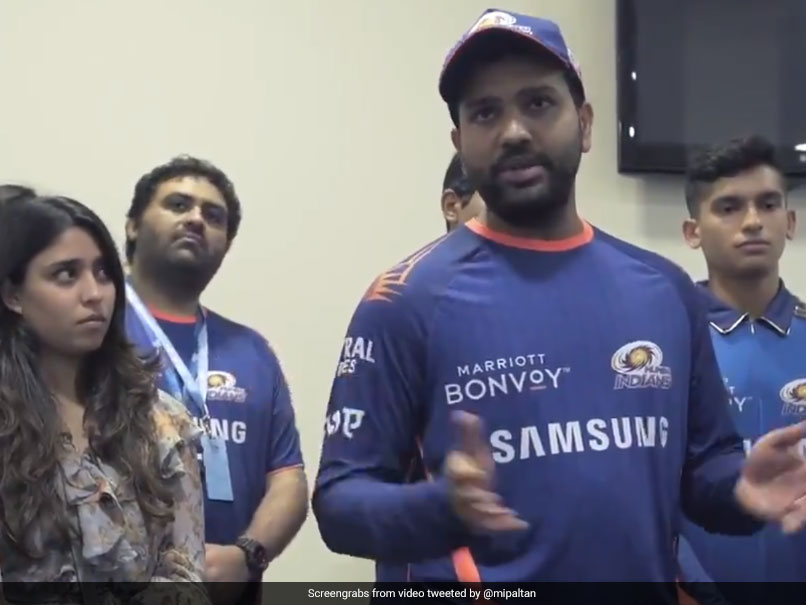 Mumbai Indiansbecame only the second Indian Premier League franchise after Chennai Super Kings to win back-to-back titles on Tuesday with a five-wicket win over Delhi Capitals in Dubai. The five-time IPL champions took to Twitter to share a video in which their captain Rohit Sharma can be seen giving a speech to the squad inside the dressing room, thanking everyone for their contribution throughout the season. Rohit also called the Mumbai Indians squad "one family". "From the #MI dressing room: @ImRo45 talks to the boys after our fifth @IPL triumph #OneFamily #MumbaiIndians #MIChampion5 #Believe," the video was captioned.

From the #MI dressing room: @ImRo45 talks to the boys after our fifth @IPL triumph #OneFamily #MumbaiIndians #MIChampion5 #Believe pic.twitter.com/a783CbuPDv

In the video, Rohit can be heard thanking all the families for their sacrifice and thanked them for making sure that the players remained in right zone to play the game.

"One last thank you to our families who have been here with us making sure that they sacrifice and be with us and making sure that we are in the right zone to play the game. All the families have been brilliant. We've actually had a great time together and that is what one family means. We were literally one family," Rohit said.

Rohit, after a string of low scores, roared back into form in the summit clash and smashed a fluent half-century.

Rohit scored a 51-ball 68 in a knock comprising of five boundaries and four maximums.

Rohit's knock helped Mumbai Indians chase down the 157-run target with eight balls to spare as they went on to lift the IPL trophy for the fifth time.

Rohit Sharmahad to sit out for a few games due to a hamstring injury during the league stages of the lucrative league.

Rohit will not feature in India's upcoming One-Day International and Twenty20 International fixtures against Australia but he will join the team for the Test series, starting December 17.

Rohit Sharma IPL 2020 Cricket
Get the latest updates on ICC T20 Worldcup 2022, check out the Schedule and Live Score. Like us on Facebook or follow us on Twitter for more sports updates. You can also download the NDTV Cricket app for Android or iOS.