IPL 2020: Hardik Pandya was full of praise for Kieron Pollard, terming the Windies cricketer as a "fantastic guy". 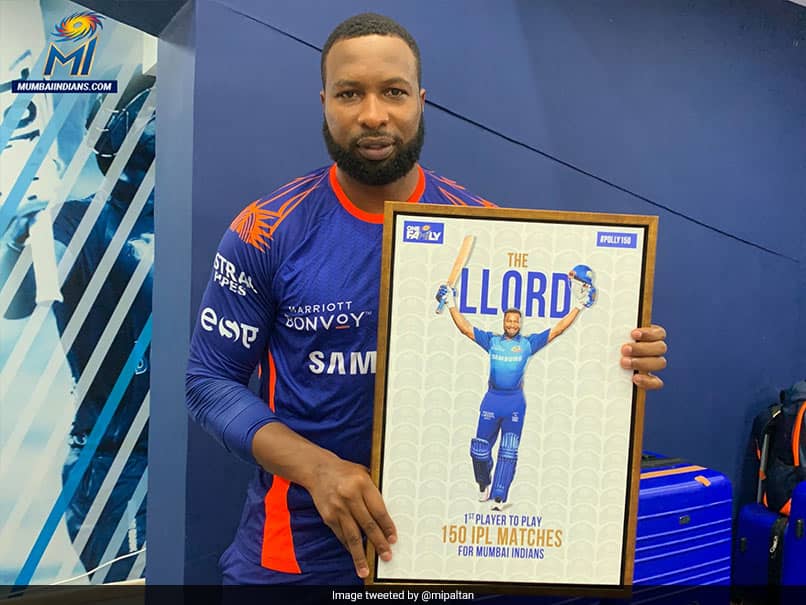 IPL 2020: Kieron Pollard played his 150th game for MI as the side locked horns with KKR on Wednesday.© Twitter

Mumbai Indians all-rounder Hardik Pandya believes that Kieron Pollard is the only cricketer who might be able to play 200 games for the franchise. His remark comes as Pollard played his 150th game for Mumbai Indians as the side locked horns with Kolkata Knight Riders (KKR) on Wednesday. "I think he might be the only cricketer who might play 200 games as well, he still has 4-5 years in him, he is just a fantastic guy, he has always been there to help and guide us, we have a relation like brothers where we celebrate our wins and enjoy our losses as well," said Pandya in a video posted on the official Twitter handle of Mumbai Indians.

Mumbai's coach Mahela Jayawardene and skipper Rohit Sharma also said good things about Pollard and how the Windies player is always ready to take up the responsibility in crucial situations.

"Pollard is someone who everyone looks up to, he plays with a lot of passion, you see that with him. Whichever franchise he plays for, but he has a soft spot for Mumbai Indians, being here for a long time," said Jayawardene.

"He has done some spectacular things on the field for us. I clearly remember the 2013 final and 2019 final, his knock was very crucial for us to get to a competitive score, he has always been a team man, he has always stood up when the team required him to. He is a very important cog in the wheel," Rohit Sharma said in the video.

Pacer Jasprit Bumrah said that Pollard brings positive energy to the side and added he has always been supportive to the entire group.

"If he has played 150 games, this means he is getting old as well. He brings a different kind of energy, he is always supportive. When the things are not going well, he takes the leadership role as well, he will chip in with a few ideas," said Bumrah.

Pollard touched the landmark figure of 150 games when the team stepped out on the field to compete against Kolkata Knight Riders (KKR). To mark the occasion, the player was presented with a special jersey, with 150 written on it.

The cricketer joined Mumbai Indians back in 2010. Pollard has so far scored 2773 runs in the IPL which includes 14 half-centuries. Also, the all-rounder has 56 wickets under his belt.

Mumbai Indians defeated KKR by 49 runs for their first win in this year's IPL. Rohit Sharma was awarded ''Man of the Match'' for his knock of 80 runs.

Batting first, Mumbai posted a total of 195/5 in the allotted twenty overs. Rohit Sharma scored 80 runs while Suryakumar Yadav chipped in with 47 runs.

Defending 195, Mumbai did a brilliant task of not giving much away and Trent Boult, James Pattinson, Jasprit Bumrah, and Rahul Chahar all got two wickets each.

Bumrah got the crucial wickets of Eoin Morgan and Andre Russell.

In the end, KKR's Pat Cummins played a quickfire knock of 33 runs, but Mumbai had sealed the victory by then.