IPL 2020, KKR vs MI: Hardik Pandya got hit wicket during Mumbai Indians' match against Kolkata Knight Riders and Twitter soon got to work churning out some hilarious memes. 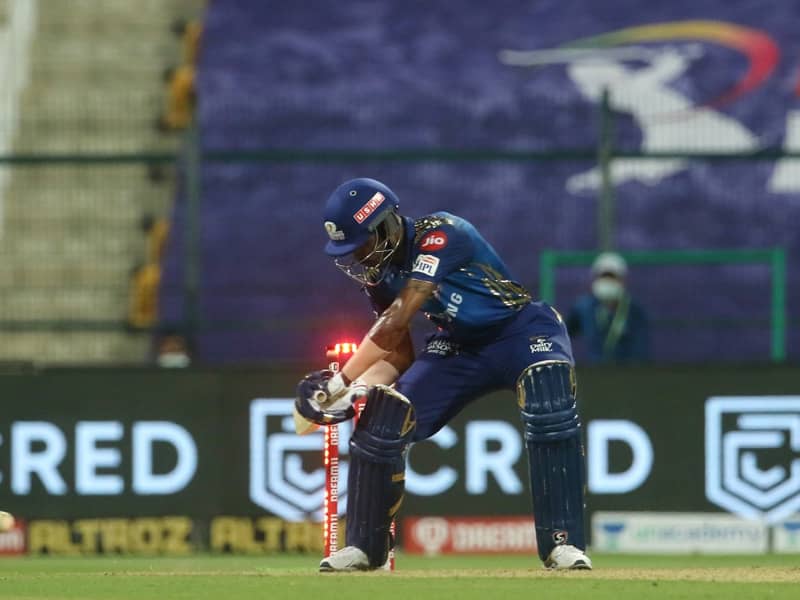 IPL 2020: Hardik Pandya crashed the stumps with his own bat against Kolkata Knight Riders.© BCCI/IPL

Mumbai Indians put on a fine batting display against Kolkata Knight Riders in their Indian Premier League (IPL) 2020 match in Abu Dhabi on Wednesday as they beat Dinesh Karthik's side by 49 runs. A fine knock of 80 from Rohit Sharma and a quickfire 47 by Suryakumar Yadav helped propel them to 195 against KKR. Flamboyant all-rounder Hardik Pandya also provided some fireworks, taking on a hapless Pat Cummins and smashing him for 15 runs in his third over. However, his batting display was not the only entertainment Pandya provided. In the 19th over, Andre Russell steamed in and bowled a wide delivery that Hardik Pandya decided to leave alone. However, he was standing so deep in his crease, his bat hit the stumps, dislodging the bail.

As Pandya walked out for 18 off 13 deliveries, social media got to work and soon there was a flurry of memes about the Pandya's moment of misfortune.

From memes involving popular Indian TV shows to jokes about "aatmanirbharta" (self-dependence), Twitter had it all.

Hardik Pandya after getting out from hit wicket pic.twitter.com/9ALhBv0N1n

Hardik Pandya is so aatmanirbhar he takes his own wicket. #KKRvMI #IPL2020 pic.twitter.com/kXrSqXpMva

Kolkata Knight Riders had gotten off to a good start after captain Dinesh Karthik won the toss and opted to field. Shivam Mavi grabbed the early wicket of Quinton de Kock too.

But then Rohit Sharma and Quinton de Kock put on a 90-run stand. Rohit and Hardik carried on after Yadav's departure, but a flurry of wickets meant MI couldn't get to the 200-run mark.

However, some good bowling and some poor shots by KKR batsmen saw them restricted to 146/9. While Hardik Pandya did not bowl in the match, he took some good catches to put a dent in KKR's attempted chase.

Andre Russell IPL 2020 Kolkata Knight Riders vs Mumbai Indians, Match 5 Cricket
Get the latest updates on India vs England Series, India vs England , live score and IPL 2021 Auction . Like us on Facebook or follow us on Twitter for more sports updates. You can also download the NDTV Cricket app for Android or iOS.