IPL 2020: Yashasvi Jaiswal's "Namaste" To MS Dhoni Shows How IPL Is All About Talent Meeting Opportunity 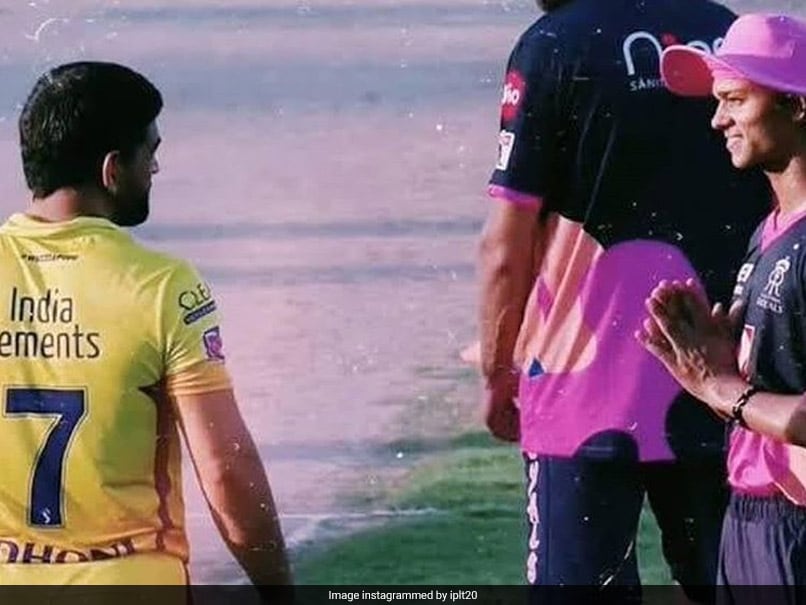 IPL 2020: Yashasvi Jaiswal was in awe of MS Dhoni ahead of CSK's clash against RR on Tuesday.© IPL/Instagram

The Indian Premier League (IPL) has over the years earned a reputation of providing young cricketers a standout platform to showcase their skills and play with and against top reputed cricketers in the world. One such cricketer who has entered the tournament with high expectations from him is 18-year-old Yashavi Jaiswal. In the match between Rajasthan Royals andChennai Super Kings, Yashasvi was seen completely star-struck by MS Dhoni and during the toss, he was seen doing ''Namaste'' to the CSK skipper. The moment has now gone viral on social media, and even IPL's COO, Hemang Amin took notice of the priceless interaction between Jaiswal and Dhoni.

Another youngster who has already left a mark in this year's IPL is RCB's Devdutt Padikkal.

The stylish left-handed batsman played a knock of 56 runs against SunRisers Hyderabad and his knock also garnered the attention of BCCI president Sourav Ganguly.

Ganguly had taken to Twitter to praise the 20-year-old's knock against Hyderabad. Even RCB team-mates like Aaron Finch, AB de Villiers had good things to say about Padikkal's composure in pressure situations.

Jaiswal was able to score just six runs in the match against CSK but the hopes from him still remain high in this year's IPL.

Yashasvi was picked by Rajasthan Royals for Rs. 2.4 crore in the player's auction which was held in December 2019 and now he would be hoping to put in match-winning performances for the side.

The left-handed batsman had an amazing U-19 World Cup this year as he managed to score 400 runs to finish as the leading run-scorer.

Rajasthan Royals had defeated Chennai Super Kings (CSK) by 16 runs in their first match of the tournament.

MS Dhoni Yashasvi Jaiswal
Get the latest updates on ICC T20 Worldcup 2022 and CWG 2022 check out the Schedule, Live Score and Medals Tally. Like us on Facebook or follow us on Twitter for more sports updates. You can also download the NDTV Cricket app for Android or iOS.