IPL 2020: Kieron Pollard Speaks About His Bond With Hardik and Krunal, And Who Is The "Smarter Pandya". Watch

Kieron Pollard has enjoyed his time on and off the field with the Pandya brothers - Hardik and Krunal - and he threw some light on his relationship with the two in a video shared by Mumbai Indians. 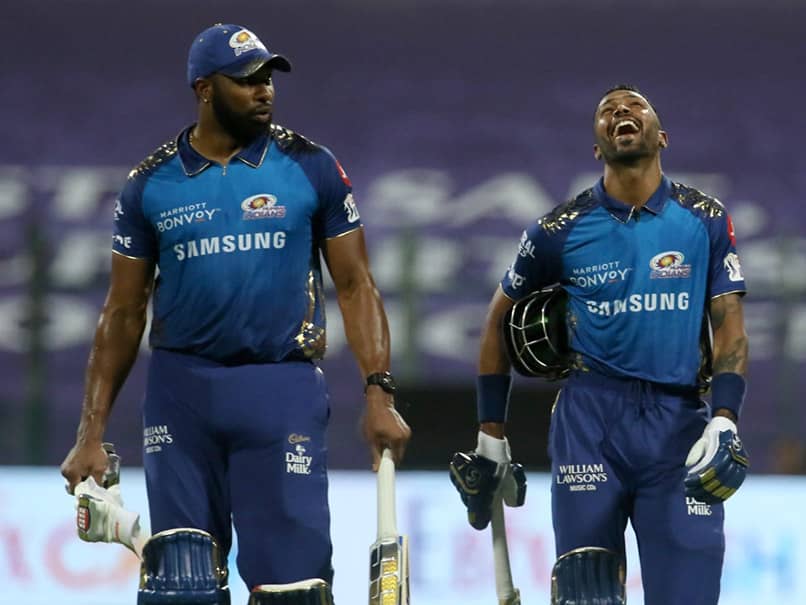 IPL 2020: Kieron Pollard spoke about his bond with the Pandya brothers - Hardik and Krunal.© BCCI/IPL

Kieron Pollard and the Pandya brothers - Hardik and Krunal - are thick as thieves at the Mumbai Indians. They come in to bat one after the other in the line-up and share a close bond off the field as well - Pollard says "there's Hardik Pandya and then there's the smarter Pandya." Mumbai posted a video on social media that shows how Pollard and the Pandya brothers bond on and off the field and how Hardik's infectious energy off the ground translates into on-field intensity.

"For us, the relationship that we have off the field transcends on to the cricket field. We share some of the same sort of sentiments. The kind of people are we are in terms of just wanting to help and just enjoying the moment and being grateful and thankful for whatever opportunity that is presented to us," said Pollard.

The off-field camaraderie has translated into on-field form as Hardik has emerged as one of Mumbai's key batsmen in the lower middle order this season as well. He has scored 278 runs from 13 games at a strike rate of 182.89 with one fifty.

Pollard's gone one up on Hardik this season, although he has played two more games, scoring 259 runs from 15 matches at a strike rate of 190.44 with one fifty.

He has also picked up four wickets with his right arm medium pace and has bowled some crucial overs at the death.

Krunal hasn't clicked as well as the other two but has been effective on occasions nonetheless. He has scored 108 runs from 15 games and picked up six wickets with his left-arm finger spin.

Kieron Pollard IPL 2020 Cricket
Get the latest updates on IPL 2021, IPL Points Table , IPL Schedule 2021 , live score . Like us on Facebook or follow us on Twitter for more sports updates. You can also download the NDTV Cricket app for Android or iOS.