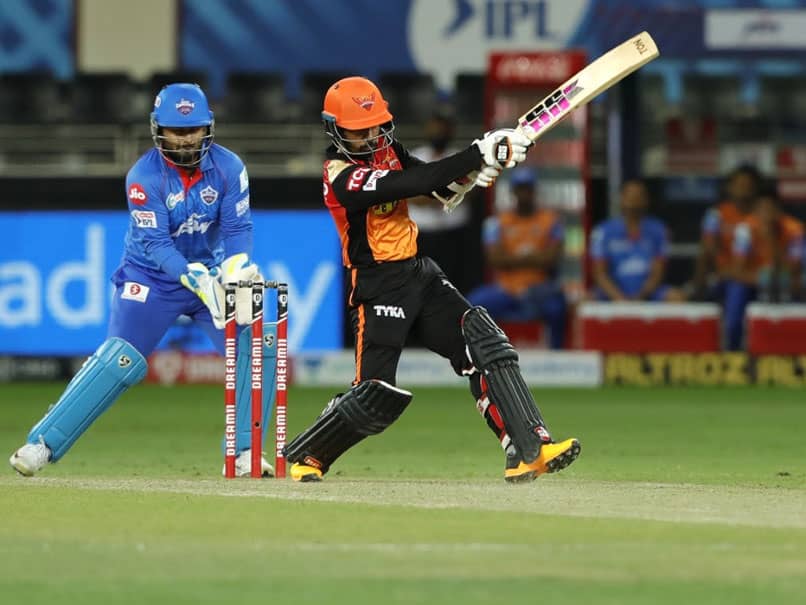 Sunrisers Hyderabad (SRH) cricketer Wriddhiman Saha played a match-winning knock on Tuesday and the wicket-keeper batsman revealed that skipper David Warner had told him to play freely before the start of the game. SRH showed no mercy as they thrashed Delhi Capitals by 88 runs at Dubai International Stadium on Tuesday. Saha and Warner played knocks of 87 and 66 respectively and enabled SRH to get past the 200-run mark. Both the batsmen had also helped SRH post 77 runs inside the first six overs against Delhi Capitals.

Saha said he wanted to play freely and skipper Warner backed his point.

"The first match I played, I had thought of how would I approach the game but in this match, I didn't think much, just asked David (Warner) how to approach, and he said ''play feely'' and I too like playing freely. Then we took chances in the first six overs and then we carried the momentum," Saha told bowler Rashid Khan in a video posted on iplt20.com.

Both batsmen had put together an opening stand of 107 runs, and finally, this partnership was broken in the 10th over by Ravichandran Ashwin as he dismissed Warner (66).

"When David got out, I took over the charge and hammered the loose balls and converted them into boundaries," Saha said.

With this win, SRH has moved to the sixth spot in the points table with 10 points while Delhi Capitals has slipped to the third spot with 14 points.

SRH will next play Royal Challengers Bangalore (RCB) on Saturday.

Wriddhiman Saha IPL 2020 Sunrisers Hyderabad vs Delhi Capitals, Match 47 Cricket
Get the latest updates on India vs Australia Series, check out the India vs Australia Schedule for 2020-21 and Ind vs Aus live score . Like us on Facebook or follow us on Twitter for more sports updates. You can also download the NDTV Cricket app for Android or iOS.