RCB, who have failed to qualify for the playoffs, will play their final IPL 2019 game when they host SRH at the M.Chinnaswamy Stadium on Saturday night. 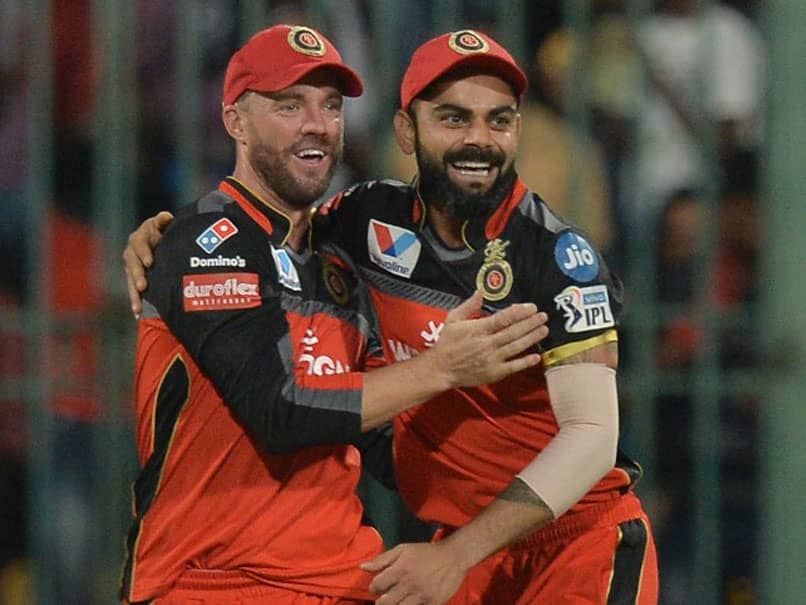 Virat Kohli and AB de Villiers thanked fans and apologised for the "up and down" performances.© AFP

Virat Kohli and AB de Villiers, the two stalwarts of Royal Challengers Bangalore (RCB), got together to thank fans for supporting the team ahead of RCB's final match in IPL 2019. RCB failed to qualify for the playoffs after just four wins in 13 matches and the RCB vs SRH IPL 2019 match will be the final game for Virat Kohli and his team this season. Ahead of RCB's last match, Kohli and De Villiers not only thanked the RCB fans but also apologised for the "up and down performances" and hoped to finish the season on a high.

Speaking about the support in the rain-abandoned match between RCB vs RR, De Villiers said,"the last over only a five-over game, it was one of the most memorable games of my life and it wasn't even a result".

Here is the entire clip:

The last game of the season is here and @imVkohli and @ABdeVilliers17 want you guys to know what's on their minds. #PlayBold pic.twitter.com/GddTgzy2Zp

RCB have a torrid time in IPL 2019, losing their opening six matches this season. And despite an improvement in their results in the last seven games, RCB failed to reach the last four of IPL 2019.

RCB will be welcoming fourth-placed SunRisers Hyderabad, who are very much in the running for a playoff berth, at the M.Chinnaswamy Stadium in Bengaluru on Saturday night.

The Bangalore outfit will be playing for pride after their hopes of entering playoffs went up in smoke after their match against Rajasthan Royals was abandoned due to rain.

Rajasthan Royals leg-spinner Shreyas Gopal took a memorable hat-trick in a five overs a side contest that was eventually called off.

AB de Villiers IPL 2019 Royal Challengers Bangalore vs Sunrisers Hyderabad, Match 54 Cricket
Get the latest updates on India vs Australia Series, check out the India vs Australia Schedule for 2020-21 and Ind vs Aus live score . Like us on Facebook or follow us on Twitter for more sports updates. You can also download the NDTV Cricket app for Android or iOS.