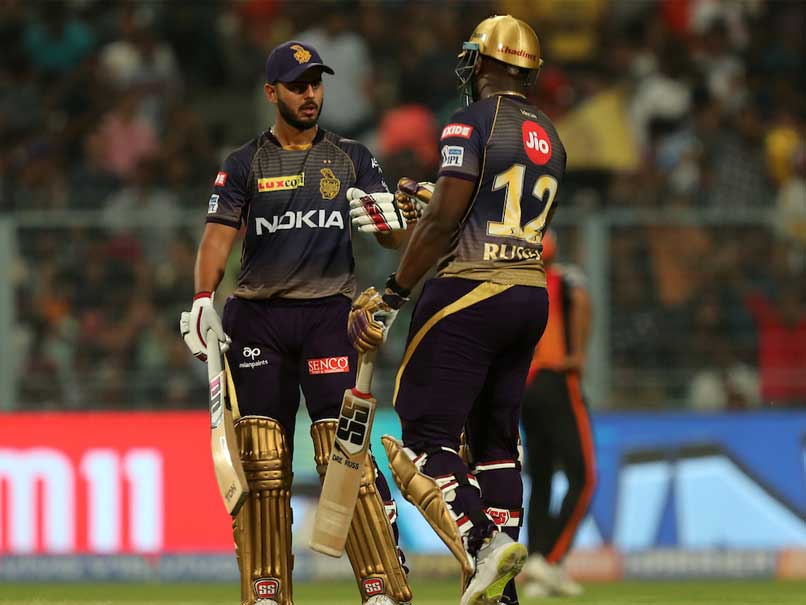 KKR vs SRH IPL Highlights: Nitish Rana and Andre Russell were the top scorers for the home team© AFP

Kolkata Knight Riders beat Sunrisers Hyderabad with 6 wickets and 2 balls to spare at the Eden Gardens on Sunday. KKR looked shaky chasing, but eventually managed to get home in the last over, powered by a blitzkrieg by Andre Russell. Winning the toss, KKR captain Dinesh Karthik opted to field first. However, the decision seemed to backfire on the home team initially as comeback man David Warner got off to a flying start, dispatching fours and sixes to all parts of the ground. KKR's spinners were expensive, and the tidier overs were bowled by their faster bowlers Lockie Ferguson, Andre Russell and Prasidh Krishna. Warner's dismissal, brought about by a stunning catch from Robin Uthappa, slowed down the scoring rate a little. Vijay Shankar, who is on a personal quest to earn a World Cup squad berth, came up with some fireworks at the end of the innings to take the score to 181/3 after 20 overs. It looked as if SRH bowlers would win the day, till Andre Russell took centrestage.  (SCORECARD)

Sunrisers Hyderabad IPL 2019 Live Score Live Cricket Score Live Blogs Kolkata Knight Riders vs Sunrisers Hyderabad, Match 2 Cricket
Get the latest updates on IND vs NZ 2021, check out the Schedule and Live Score . Like us on Facebook or follow us on Twitter for more sports updates. You can also download the NDTV Cricket app for Android or iOS.