The probe panel report submitted by Anti-Corruption Unit chief Ravi Sawani to the Board of Control for Cricket in India (BCCI) disciplinary committee. 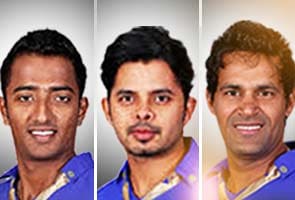 During Sreeesanth's examination, he stated that he was closely associated with Jiju Janardhan, another cricket player. They had first met at MRF Pace Foundation in 2003.

Sreesanth stated that Jiju had joined him at Jaipur either before or after the Mumbai Indians game. According to Sreesanth Jiju was his partner while training in the gym.

The Delhi Police had questioned Sreesanth about the alleged fix arrived at by Jiju on his behalf i.e. to give 14 runs in his second over during the IPL game against Kings XI Punjab at Mohali. As per Delhi Police, Jiju had arranged with the bookies that he would give a signal to confirm that the fix was on by wearing a towel. Sreesanth stated that Delhi Police had accused him of having done this fix with Jiju and other bookie agents he later learnt to be Mannan and Chandresh Patel.

While deposing before me, Sreesanth denied any knowledge about the fix and stated that he did not underperform. He normally wore a towel or a wrist band to wipe off sweat and to ensure that the ball was free of moisture. According to Sreesanth, though, it is a fact that he had admitted certain wrongdoings before Delhi Police and signed some confessional statements, but those were a result of continuous torture and interrogation. S. Sreesanth claimed that he wanted to get out of the place by making the police officials happy about what they had achieved. According to Sreesanth, the police had threatened him and Abhishek Shukla that they would arrest their relatives if they did not confess. Sreesanth claimed that he had no connection with the money (Rs 5.5 lakh) that was recovered from Shukla's house and that he was not aware of its source.

Sreesanth further stated that he neither knew Mannan nor Chandresh and had never spoken to them over phone. Sometime at the start of the IPL, when he was coming out after a party, he was requested to pose for a photograph with Mannan and Chandresh who were sitting in the lobby. He obliged. Both had also taken pictures with other players present in the hotel that day. Sreesanth admitted he had received Anti-Corruption education prior to each IPL season and many times as an international player. Finally, Sreesanth stated that he had never been approached by anybody to do anything wrong in cricket and denied all allegations levelled against him. 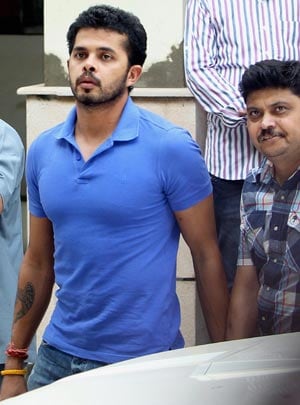 I have been able to obtain from Delhi Police sources transcripts of two conversations between Sreesanth and Jiju recorded on May 5. Sreesanth is heard directing Jiju to buy three phones. In reply, Jiju refers to receipt of certain money wherein he states that he has already received ten, of which he would retain seven. He confirms that the seven will be handed over to Sreesanth. In reply, Sreesanth tells Jiju to take one out of that money and purchase the three phones.

During my personal conversations with Delhi Police officials they had confirmed that both Sreesanth and Jiju during their custody had broken down in the face of strong and irrefutable evidence and confessed to having fixed the match. When Jiju told Sreesanth that he had already told the police everything and that there was no point hiding facts any further, both cried and hugged each other before Sreesanth also admitted to being part of the fix. However, during his examination by me, Sreesanth stated that he had confessed only due to the enormous pressure he was put under.

The audio tapes in the possession of the Delhi Police, and the transcripts, clearly indicate that Sreesanth had already received Rs 10 lakh from someone as part of the fix and that such money was available in their rooms on May 6, i.e. before the Mohali match on May 9. Delhi Police also confirmed that they have a recorded conversation between Jiju and a bookie wherein Jiju is discussing the specifics of the fix. It is already on record that Rs. 5.5 lakh was recovered from Sreesanth's friend Abhishek Shukla who had indicated to Delhi Police that the money had belonged to Sreesanth. Sreesanth denies it and alleged that the money was planted by Delhi Police. I cannot believe that they would plant such a huge sum of money just to prove their case.

It is also on record that Delhi Police had recovered the Z 10 Blackberry presented by Sreesanth to Sakshi Jhala in Jaipur, who admitted that it had been gifted by Sreesanth. The recoveries made by Delhi Police corroborate the transcript. In the circumstances, I have no reason to doubt the veracity of the audio tapes and the transcripts. The Delhi Police are unable to provide the tapes to this Inquiry Commission without the prior permission of the court which has taken cognizance of the case against the IPL players. However, in view of the ample corroboration available and proven contacts between Jiju and the bookmakers, I am fully convinced that Sreesanth was part of the fix and, therefore, I confirm my earlier findings of holding S Sreesanth guilty of the offences listed in my initial report.

Amit Singh was arrested by the Delhi Police from Hotel Intercontinental in Mumbai on the intervening night of May 15 and 16, 2013 along with friend Mannan Bhatt. Singh had been asked to stay back in Mumbai by Bhatt and was later introduced to accused bookie Chandresh Patel at the same hotel. Patel asked the other two to leave his room at around noon as he welcomed a visitor, who was overheard by Singh as claiming to introduce a few more players to the accused bookie. Bhatt informed Singh that Patel was also scheduled to meet with Royal Challengers Bangalore players Vinay Kumar and Ravi Rampaul.

Singh and Siddarth Trivedi had originally met a local Gujarat player called Dileep in 2011 through a person named Tommy in Ahmedabad where they were asked to concede a specified number of runs in certain overs. They were paid Rs 1 lakh for the meeting. Dileep later called both players asking them to indulge in fixing during IPL-IV but both refused to do so. Singh and Trivedi then returned the money a month after the IPL.

Then in January 2012, Singh and Trivedi met Ajit Chandila, Manish Guddewal and another man, probably Sunil Bhatia, during a domestic tournament at the JW Marriot Hotel in Mumbai. There the duo were asked to indulge in shopping at the cost of Guddewal but no fixing was discussed. Singh missed his flight the next morning as he awaited a gift from Guddewal, who he later confronted. Singh was informed by Chandila while both were in custody in Delhi that he had accepted Rs 12 lakhs each on the behalf of Singh and Trivedi from Bhatia. 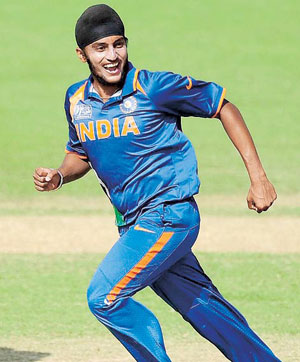 In January 2012, Singh was approached by a man called Vishal, who tried convincing him into fixing matches in the IPL. Singh met Vishal near his office but refused to do his bidding and also did not divulge information or references regarding other players.

Singh was approached in January 2013 by Mannan Bhatia, a bookie and associate of Chandresh Patel. Singh loaned Bhatia Rs 50,000 in order to get bail for his father. The two then became regular friends but Singh refused Bhatia's offer to fix IPL matches despite repeated pleas. He did hand him Chandila's phone number. He realized then that Chandila and Bhatia were already in touch and that the former had already introduced Rajasthan Royals players Ankeet Chavan and Harmeet Singh.

Singh then received a call after one of the afternoon matches in IPL-VI from Bhatia claiming that his party had suffered heavy losses after Chandila had deceived them. Chandila then began ignoring calls from Bhatia and Patel, and Singh was often brought in to convince him to take their calls.

According to Singh, Chandila never fixed anything during a match and was instead fooling the bookies by simply accepting money from them. And that he received a call from Chandila accusing Patel and Bhatia of harassing him with repeated calls to which Singh asked his former teammate to return the money to the bookies.

Amit Singh appears to be the bad fish that spoils the entire pond as he provided introductions with players and paved way for fixers to corrupt them. He admitted on numerous occasions to have been party to the discussions and approaches made by Bhatia and Patel and there is evidence to prove that he was used by them to access various players directly or indirectly. He deserves no sympathy and I hold him guilty of all offences listed against him.

The charges against the players:

* Seeking or offering a bribe as a reward for match-fixing

* Underperforming for a reward

* Ensuring the occurrence of an event during a match, knowing it is the subject of a bet

* Soliciting other players for match-fixing in the IPL

Comments
Topics mentioned in this article
Cricket Sreesanth Amit Singh Ankeet Chavan Siddharth Trivedi IPL 2013 Indian Premier League 2012 BCCI
Get the latest updates on IPL Auction 2023 and check out  IPL 2023 and Live Cricket Score. Like us on Facebook or follow us on Twitter for more sports updates. You can also download the NDTV Cricket app for Android or iOS.