Reg Simpson made 27 Test appearances for England, the highlight of which was an unbeaten 156 against Australia in Melbourne in the final Test of the 1950-51 Ashes series. 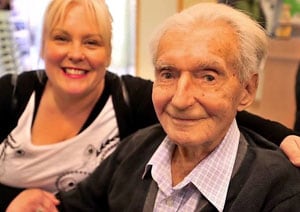 The oldest surviving player to have played in an England Test match, Reg Simpson, has died at the age of 93, his former county Nottinghamshire announced on Wednesday.

Simpson made 27 Test appearances for England, the highlight of which was an unbeaten 156 against Australia in Melbourne in the final Test of the 1950-51 Ashes series.

"Reg Simpson was an elegant opening batsman who served his country with distinction both as a pilot in the Second World War and a fearless player of fast bowling," said England and Wales Cricket Board chief executive David Collier.

"His 156 in Melbourne led England to our first post-War Test victory in Australia and Reg succeeded Sir Alec Bedser as England's most senior player in 2010.

"He held a deep passion for the game and his beloved Trent Bridge. On behalf of everyone at ECB we extend our deepest sympathy to Reg's family."

Simpson also played in 495 first-class matches, amassing 30,546 runs, and served on the Nottinghamshire committee for 37 years after retiring.

"He was an excellent talent and would undoubtedly have achieved even more in the game if his career had not been put on hold for the outbreak of war in 1939," said Nottinghamshire chairman Peter Wright.

"His achievements outside his playing career, firstly during the war as a pilot, and later as a managing director of (sports equipment company) Gunn and Moore will always be remembered."

Comments
Topics mentioned in this article
Cricket David Hussey Reginald Thomas Simpson Rahul Dravid Indian Premier League 2012
Get the latest updates on IPL Auction 2023 and check out  IPL 2023 and Live Cricket Score. Like us on Facebook or follow us on Twitter for more sports updates. You can also download the NDTV Cricket app for Android or iOS.