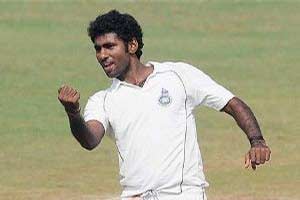 Delhi pacer Parvinder Awana (5/97) took five wickets after a splendid century by Odisha's Natraj Behera (158) as the visitors took a crucial first-innings lead in their Ranji Trophy group A match here on Sunday.

Led by Awana, Delhi bowled out Odisha for 379, 63 runs behind their first innings total of 442.

Delhi were 49 for two at the end of day's play with skipper Gautam Gambhir back in the hut for just five. The other batsmen to get out was Unmukt Chand (3).

Earlier, starting day three on 121 for three, opener Natraj, overnight 53, carried on the good work and brought about his fourth first-class century at the Surendra Sai Stadium here.

Natraj recorded 157-run stand with Abhilash Mallick (71) for the fifth wicket and looked good to surpass Delhi's first innings total but both fell in quick succession to hand an all important lead to the visitors.

Natraj scored 23 boundaries in his 290-ball knock while Mallick took 105 deliveries for his 71 that included 10 fours and two sixes.

Besides Awana, left-arm spinner Varun Sood (3/67) was instrumental in removing the lower-order batsmen while Ashish Nehra and Sumit Narwal claimed one wicket each.

Delhi were 112 runs ahead with eight wickets in hand. Suryakant Pradhan and Deepak Behera were the wicket takers for Odisha.