Haven't measured my speed, but I am not bowling slow: Varun Aaron

Varun Aaron, considered to be genuinely quick before his back injury, played in the IPL for Delhi Daredevils in 2012 but was again troubled by his back and had to undergo surgery in March this year. 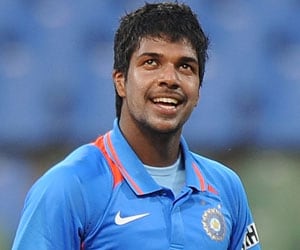 Young speedster Varun Aaron, who has been out of action for nearly two years because of a recurring back problem that needed surgery, said he hasn't lost even a small amount of pace post his operation.

"I don't think so (lost pace). I haven't measured my speed, but I am not bowling slow," he said ahead of his side, Jharkhand's maiden Ranji Trophy clash against holders Mumbai commencing on Friday at the Wankhede Stadium.

"I have been bowling well. I train really hard. That is one thing I learnt from (Australia pace guru) Dennis Lillee, that as long you are a fast bowler, you have to train really hard. Since 15, I have been at the (MRF) pace foundation (in Chennai). I do train very hard and try to bowl as quick as possible," he insisted.

Aaron, considered to be genuinely quick before his back injury, played in IPL 5 for Delhi Daredevils in 2012 but was again troubled by his back and had to undergo surgery in March this year.

He has played for Jharkhand in three matches this season and picked up 11 wickets.

The 24-year-old said he wasn't planning to undergo the surgery but had no choice.

"I was not supposed to undergo a back surgery in the beginning. But later on I didn't have an option, so there wasn't much thinking about it. I had to get a surgery done towards the end. It is good that it has worked for me."

The young pacer, who made his Test debut against the West Indies here in November 2011, said it was disappointing not to play again for India because of injuries, but sounded hopeful of making a comeback.

"It is difficult. Once you get there you should always retain your place is what I feel. Especially when you are not in the team because of an injury...it is disappointing. Injury is something you don't have control over, so I don't give it much thought. I trust myself a lot and back myself a lot to make a comeback."

Aaron had to miss the tour of Australia in December 2011 due to stress reaction in the back.

The right-arm speedster credited the National Cricket Academy (NCA) and the BCCI for helping him get back to playing cricket after a long lay off.

"I am playing today because of the NCA, because I have been there for almost a year and half and the BCCI backed me a lot with my surgery and my rehab. I went to MRF pace academy for a while. Then I also went to Austria for a week for high performance testing. I was very lucky to have a very good support team throughout my injury problems," he said.

Aaron said the three Ranji matches he has played so far in this season for his state will help him get on with his interrupted cricket career.

"I hadn't played matches for so long. I have played three matches now and got some match practice under my belt. So it is a little easier for me to move forward from now on." Asked about rising competition in fast bowling, he said,

"I really don't look at competition that much. I just concentrate on myself. Whenever I am due for a place, I will get my place."

The Jharkhand bowler picked up three wickets in his only Test match, and also has six scalps in his kitty from four ODIs.

Comments
Topics mentioned in this article
Cricket Varun Aaron Anil Kumble Indian Premier League 2012 Delhi Daredevils
Get the latest updates on IPL Auction 2023 and check out  IPL 2023 and Live Cricket Score. Like us on Facebook or follow us on Twitter for more sports updates. You can also download the NDTV Cricket app for Android or iOS.