The police had alleged Sreesanth promised bookies to concede at least 14 runs in his second over against Kings XI Punjab on May 9 in exchange for Rs 40 lakh. The police claimed Sreesanth flagged the over for the bookies' benefit by tucking a towel in his trousers. 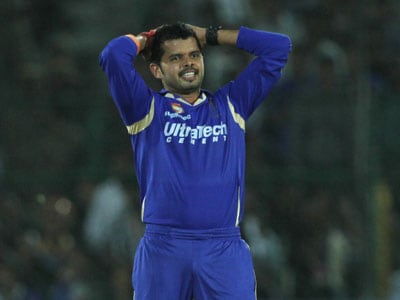 A day after the Delhi Police arrested three Rajasthan Royals players - S Sreesanth, Ankeet Chavan and Ajit Chandila - for their alleged involvement in spot-fixing in the Pepsi Indian Premier League, the Board of Control for Cricket in India scheduled an emergency meeting of its working committee in Chennai for Sunday (May 19). The decision came on the back of a flurry of "leaked reports" emanating from Delhi - where the three cricketers are being interrogated by the Special Cell of the Delhi Police - that claimed more players could be involved in the case. Unconfirmed reports suggested two more players from the Royals' squad are under the scanner.

The BCCI also confirmed the arrest and suspension of Amit Singh, the Gujarat and former Rajasthan Royals cricketer. One of the 14 people arrested in connection with the case on Thursday, Amit is accused of being the "talent-spotter" for the bookies. Amit, who played 24 matches for Rajasthan Royals in four editions from 2009 to 2012 (taking 28 wickets and even bagging one Man of the Match award in the 2009 edition), allegedly used his access to his former teammates to approach them for spot-fixing. Media reports claimed that Amit contacted players on behalf of a bookie named Chandresh, who has also been arrested. Amit, who was banned in 2012 because of a suspect bowling action, last played an IPL match in May 2012.

Meanwhile, details emerging on whether the incarcerated players had confessed to accepting money to concede runs were sketchy. While news agency IANS quoted a Delhi police official as saying that a "teary-eyed" Sreesanth had "confessed" to spot-fixing, the former India bowler's lawyer insisted that his client was "totally innocent" and would seek bail during the next hearing.

The police had alleged Sreesanth promised bookies to concede at least 14 runs in his second over against Kings XI Punjab on May 9 in exchange for Rs 40 lakh. The police claimed Sreesanth flagged the over for the bookies' benefit by tucking a towel in his trousers. But his lawyer, Deepak Prakash, dismissed the charges. "A person can use a towel in any way, how is this evidence? It is a matter of luck. He can use a towel whenever he wants," said Prakash.

NDTV, the news channel, claimed its police sources had alleged that Sreesanth accused Jiju Janardhan, an alleged bookie who played a key role in the case, of getting him into trouble. Jiju is being said to have played cricket for the same Kerala club as Sreesanth. On Thursday, the police had released phone transcripts of a conversation purportedly between Jiju and another bookie discussing details of how Sreesanth would allegedly spot-fix in the match against Kings XI.

SN Srivastava, the Special Commissioner of Delhi Police, Special Cell, was also quoted as saying that the management of Rajasthan Royals may be questioned if necessary. The franchise is co-owned by actor Shilpa Shetty and her businessman husband Raj Kundra.

But the Chief Excecutive Officer of the Rajasthan Royals, Raghu Iyer, issued a statement, saying the Royals had launched a comprehensive internal investigation and would also make all information available to the authorities probing the allegations.

"RR (Rajasthan Royals) is closely coordinating with the BCCI and the IPL Governing Council to take whatever steps may be necessary in the current situation," the statement read. "RR has noted statements which have been made today, including by Ajit Chandila's lawyer, Mr. Rakesh Kumar, suggesting that it was made aware of such matters: these are completely unfounded and are totally refuted. RR will take legal action in the event that such defamatory statements continue to be made by any person."

Iyer's statement also addressed speculations about the players under arrest pointing to cases of fixing in previous IPL editions. "RR has also noted statements which suggest that there have been other related instances in the past," Iyer said through the statement. "RR absolutely confirms that it has never had any knowledge of any such matters. RR works closely with the ACSU, and has always fully complied with all of its related obligations, as a participant in the IPL."

Media reports also claimed that Chavan, who has played 13 matches for the Royals since 2011, broke down in custody and confessed. Chavan reportedly said he had made a huge mistake by getting lured into the world of spot-fixing and also allegedly claimed that he was initially reluctant but forced by others to spot-fix.

Meanwhile, in Chennai, five people were arrested for their alleged links with the Twenty20 betting racket. The police are said to be probing whether they had direct links with any of the players arrested on Thursday.