The Cricket Association of Bihar is planning to file a fresh interim appeal to stop Chennai Super Kings and Rajasthan Royals from participating in the IPL auctions scheduled early next year. Meanwhile, a three-member Supreme Court-appointed panel is probing allegations of corruption against Chennai and Rajasthan team owners. The Cricket Association of Bihar, whose Special Leave Petition finally led to the Supreme Court appointing the Mudgal committee, is in no mood to rest as it now plans to file a fresh (but related to its earlier appeals against IPL corruption) plea to stop CSK and Royals from taking part in the 2014 IPL auction. Speaking to sports.ndtv.com on Thursday, Aditya Verma, the secretary of the Bihar association said a fresh interim appeal will be filed in the Supreme Court after the Durga Puja vacation. (Read: Charges against Gurunath have nothing to do with me, says N. Srinivasan)

"Yes, we are planning to file it on October 17 once the court reopens after the break. We want to keep the pressure going and now that the Supreme Court has mentioned Meiyappan in its order, there is no reason why CSK should not be banned from the IPL," Verma said. (Read: Bihar cricket official Aditya Verma continues legal war against N. Srinivasan despite death threats)

The next IPL auctions are due early next year with all players up for grabs. The 2013 auctions, held on February 3, was the last time when franchises could retain its marquee players. The court-appointed committee is expected to submit its report and recommendations by January-end and that can have a far-reaching effect on several IPL plans. The future of Chennai and Rajasthan will depend on the Mudgal committee report and if the BCCI/IPL governing council goes by the rule book, both teams face termination.

According to clause 11.3 of the IPL franchise agreement, if any official, team owner or anyone associated with the team tarnishes the image of the league, the franchise can be terminated immediately. Meiyappan was designated as the Team Principal of CSK before being 'demoted' when news of him being involved in illegal betting came to limelight. And Raj Kundra, the husband of Bollywood actress Shilpa Shetty and a Rajasthan Royals team owner, is also facing charges of betting. 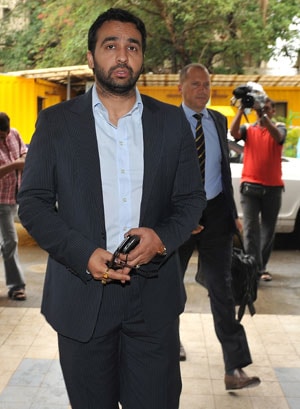 "Let the probe committee furnish its independent report. Our crusade is against corruption in IPL and the people who have been active with betting and spot-fixing. The BCCI is following double standards. One committee bans players and one bans Lalit Modi. Who bans the Meiyappans and Kundras?" Verma said.

Verma feels the new IPL chairman Ranjib Biswal is sitting on an active volcano. Verma feels Biswal is under tremendous pressure to cleanse the IPL system. "Wait for the Mudgal committee report. More scandals will emerge. The game has only begun," says Verma.

Comments
Topics mentioned in this article
Cricket Indian Premier League 2012 Rajasthan Royals Chennai Super Kings
Get the latest updates on IPL Auction 2023 and check out  IPL 2023 and Live Cricket Score. Like us on Facebook or follow us on Twitter for more sports updates. You can also download the NDTV Cricket app for Android or iOS.