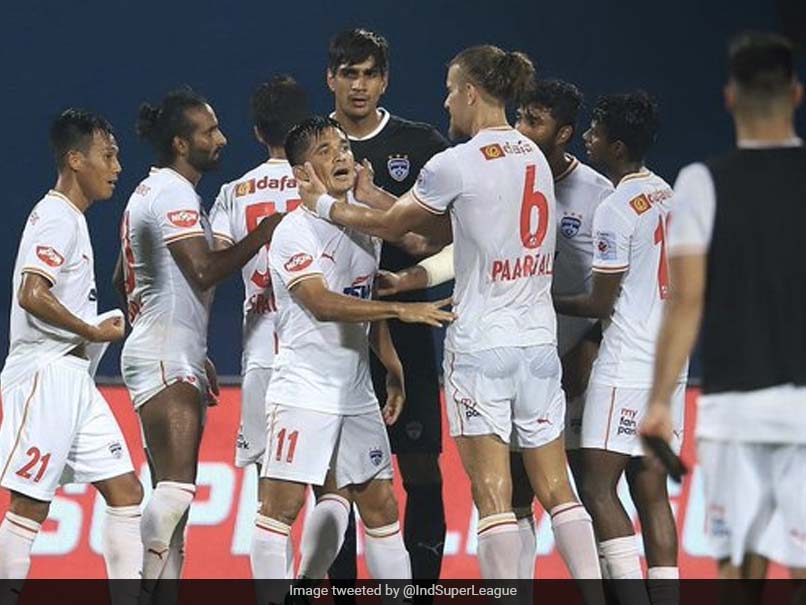 Mumbai City FC had 23 shots, the most they have had in the entire season but they just couldn't get the result they were looking for. Instead, it was a rejuvenated Bengaluru FCside that walked away with three points after an impressive 4-2 win in the Indian Super Leagueat the GMC Stadium on Monday.

It took just 25 seconds for BFC to take the lead with Silva scoring the fastest goal of the season and second-fastest in the history of the league. After getting the ball in midfield, Chhetri released Udanta Singh on the wing. The winger sprinted down the flank and sprayed a pass across the face of the goal to Silva, who made no mistake.

Mumbai had a better possession and more shots on target, but overall BFC were sharper in transition and terrific on the counter.

As Mumbailooked to wrest control, the Blues were putting up one of their finest performances of the season and were rewarded with their second in the 22nd minute from a set-piece. Xisco Hernandez sent in a delightful ball at the far post and Silva timed his run to head it into the back of the net. Amrinder Singh, who moments earlier had denied Erik Paartalu with a fine save, couldn't do much.

Lobera's side had two good chances to get back into the game, one through Le Fondre and another through Raynier Fernandes but both were not converted. Gurpreet Singh Sandhu then made a big save to deny Mourtada Fall.

The Islanders came back stronger in the second half and managed to reduce the deficit. Cy Goddard made a run on the right and threaded a well-time cross inside the box. Le Fondre got in front of Harmanjot Khabra and caressed the ball past Gurpreet.

But BFC restored their two-goal lead within seven minutes through Chhetri. Gurpreet's goal kick found Chhetri upfront who had Hernan Santana on him. However, the latter took a tumble, setting Chhetri free with just Amrinder between him and the goal and the skipper made no mistake.

But there was another twist as, with 20 minutes left, Le Fondre scored his second, guiding a Goddard freekick past Gurpreet.

Mumbai kept knocking in search of the equaliser and nearly scored through Le Fondre, but Gurpreet produced a fine save.

At the other end, BFC scored their fourth to seal full points. Edmund Lalrindika set Chhetri through and he coolly scored past Amrinder for his second.

Mumbai City FC Indian Super League Sunil Chhetri Football
Get the latest updates on IND vs NZ 2021, check out the Schedule and Live Score . Like us on Facebook or follow us on Twitter for more sports updates. You can also download the NDTV Cricket app for Android or iOS.