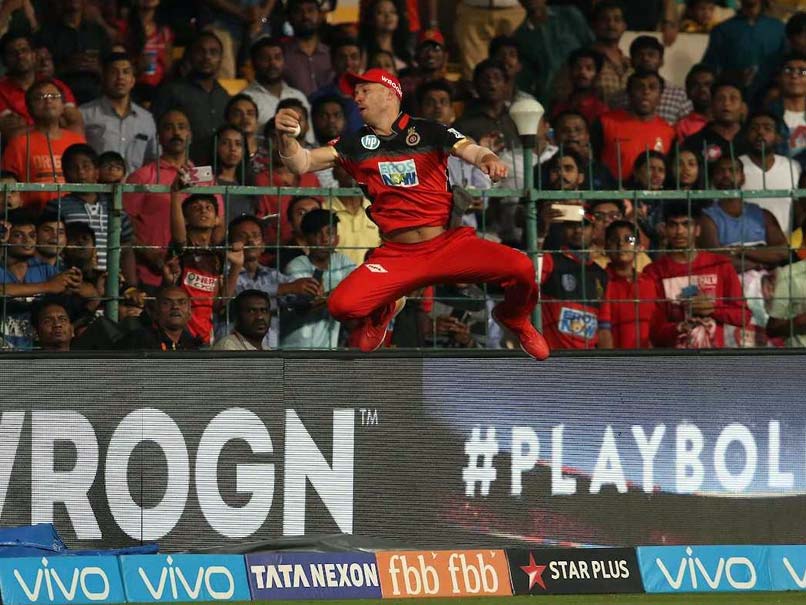 AB de Villiers took one of the best catches ever taken on a cricket field to dismiss SRH's Alex Hales.© BCCI

Not only did AB de Villiers get the job done with the bat but the South African star was electric in the field as Royal Challengers Bangalore kept their IPL 2018 playoffs hopes alive with a crucial win over table-toppers SunRisers Hyderabad on Thursday night. It was a strange day for fielding at the M.Chinnaswamy Stadium in Bengaluru. There were two absolute blinders (by AB de Villiers and Rashid Khan) but inexplicably one of the safest pair of hands in the field in world cricket, Virat Kohli, dropped two sitters. However, the dropped catches didn't dampen Kohli's spirits and after RCB's win, he took to Twitter to salute teammate AB de Villiers for a miraculous catch that sent SunRisers Hyderabad opener Alex Hales packing.

SRH were going great guns in their chase of 219 despite Shikhar Dhawan's departure. Englishman Alex Hales was looking dangerous, having already hit three sixes and two boundaries, but in the 8th over, AB de Villiers took arguably one of the best catches to be ever taken on a cricket field, bringing to an end Hales' stay.

Earlier in the day, AB de Villiers had shone with the bat, smashing a 39-ball 69 at a strike rate of 176.92 to help RCB post 218 for six in their allotted 20 overs. Kane Williamson (81 off 42 balls) and Manish Pandey (62 off 38 balls) had threatened to take the game away from the hosts but RCB's total proved to be a a little too much for the visitors.

The win was crucial to RCB's cause qualifying for the playoffs. Victory in Bengaluru, took Virat Kohli's team to 12 points with one match remaining. RCB are fifth in the IPL Points Table, equal on points with fourth-placed Mumbai Indians, sixth-placed Rajasthan Royals and seventh-placed Kings XI Punjab.

If RCB win their final match against Rajasthan Royals, they will need Kolkata Knight Riders to lose to make to the top four. Best scenario for Kohli's team will be if Mumbai Indians also lose, but in the event they win, then RCB will need a big win over Rajasthan to better MI's net run-rate.

If Kings XI Punjab manage to beat Chennai Super Kings in their final match, they will need to do so by a massive margin to try and overhaul RCB's net run-rate.

Comments
Topics mentioned in this article
Royal Challengers Bangalore Sunrisers Hyderabad Virat Kohli AB de Villiers Alex Hales Indian Premier League 2018 Cricket
Get the latest updates on India vs South Africa and check out  Schedule, Results and Live Score. Like us on Facebook or follow us on Twitter for more sports updates. You can also download the NDTV Cricket app for Android or iOS.