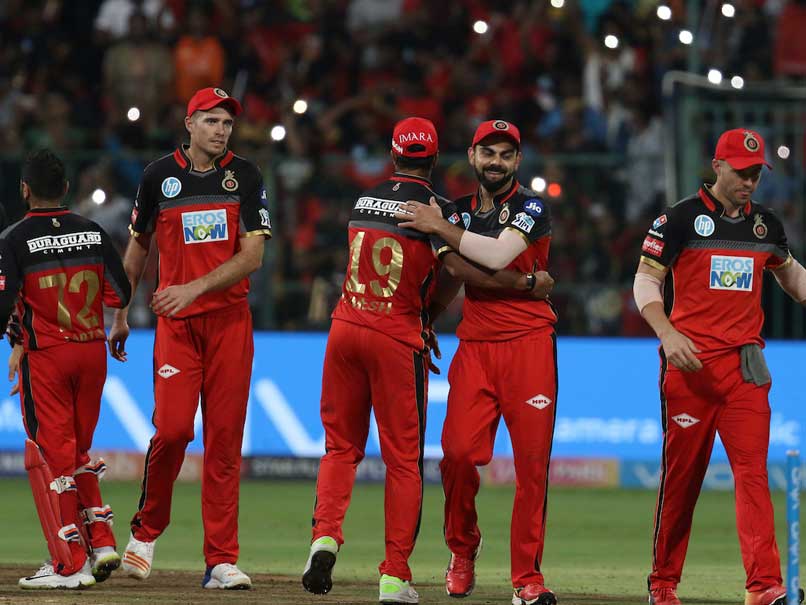 AB de Villiers and Moeen Ali struck magnificent half-centuries as Royal Challengers Bangalore (RCB) held their nerves under pressure to beat table-toppers SunRisers Hyderabad (SRH) by 14 runs in a must-win match and stay afloat in the Indian Premier League (IPL) 2018 on Thursday night. Asked to bat, RCB posted a mammoth 218 for six before surviving a scare from SunRisers skipper Kane Williamson (81 off 42) and Manish Pandey (62 off 38) to restrict the visitors to 204 for three. De Villiers (69 off 39) and Ali (65 off 34) overcame a bad start to stitch 107 runs off just 57 balls for the third wicket to not only set the platform for RCB's total but also keep their team in contention.

Chasing the mammoth total, SunRisers started on a positive note piling up 47 runs off the first five overs before Shikhar Dhawan hit one straight back to Yuzvendra Chahal off his own bowling in the next over.

Alex Hales (37 off 24) was going great guns before De Villiers pulled off a blinder of a one-handed catch at midwicket boundary off Ali to sent the Englishman back.

But SunRisers captain Williamson had other intentions as he took the attack to the opposition and hit Tim Southee for consecutive boundaries before clobbering Ali for two fours and six in the next over to keep his team abreast with the required run rate.

Williamson went about his business in elegant fashion without taking much risk and was ably supported by Pandey at the other end as the duo stitched magnificent 135 runs for the second wicket off just 68 deliveries to virtually take SunRisers home.

Williamsion, in particular, looked in sublime touch as he struck the balls to all parts of the ground without taking any undue risk, while Pandey took his time to get going.

But eventually the asking rate proved to be too tall for SunRisers as Southee produced some brilliant death bowling display to deny an improbable win for the visitors.

South produced a brilliant 16th over that yielded just six runs and then came back an over later to give SunRisers a 20-run target from the last over.

But it was not to be as Williamson's dismissal in the first delivery of the final over sealed SunRisers fate and they eventually fell short by 14 runs.

By virtue of this win, RCB climb up to the fifth spot with 12 points from 13 games and need to win their last league game against Rajasthan Royals in Jaipur on Saturday to harbour any play-off hopes.

Earlier, Afghanistan's leg-spinner Rashid Khan once again shone bright with the ball for SunRisers with figures of 3/27 from his four over.

But SunRisers were off to a great start as they reduced RCB to 38 for two inside five overs after opting to field.

Sandeep Sharma (1/40) struck the first blow with the last ball of the opening over, removing Parthiv Patel caught by Siddharth Kaul at third man boundary.

De Villiers then got into the act for RCB, hitting some exquisite boundaries off Shakib Al Hasan and Sandeep before Rashid cleaned up skipper Virat Kohli (12) with a googly in the fifth over.

Brought into the attack in the eighth over, Basil Thampi leaked runs as Ali smashed consecutive sixes off the pacer -- first over mid-off and then over square-leg boundary -- to give momentum to RCB's innings.

De Villiers brought up his fifty off 32 balls with two consecutive boundaries off Kaul (2/44) in the 12th over and then Ali followed suit notching up his maiden IPL half-century with a four of Thampi in the next over.

The duo went hammer and tongs as an otherwise tidy SunRisers bowling attack looked clueless in front of the onslaught.

But just when it seemed the duo would run away with their power-hitting, Rashid struck twin blows in the 15th over removing both the set batsmen.

De Villiers perished in search of a big shot caught by Dhawan at deep square leg while Ali reverse-paddled a delivery to Sreevats Goswami behind the stumps a ball later.

While De Villiers struck as many as 12 fours and one six, Ali's innings was laced with two boundaries and six hits over the fence.

Thereafter, Colin de Grandhomme used his brute power to score 40 runs off just 17 balls while Sarfaraz Khan remained unbeaten on 22 off 8 balls to provide the late impetus to RCB's innings.

It turned out to be a forgettable day for Thampi as he conceded the most runs by a bowler in an innings in the history of IPL. He leaked 70 runs from his dour overs.

Comments
Topics mentioned in this article
Royal Challengers Bangalore Sunrisers Hyderabad Indian Premier League 2018 Cricket Virat Kohli AB de Villiers
Get the latest updates on Fifa Worldcup 2022 and check out  Fifa World Cup Schedule, Stats and Live Cricket Score. Like us on Facebook or follow us on Twitter for more sports updates. You can also download the NDTV Cricket app for Android or iOS.