IPL 2018: Vinay Kumar Defends Himself After Fans Lash Out At Him For Poor Last Over

Indian Premier League: Vinay Kumar took to Twitter and asked the fans to keep their calm as 'sometimes things do go wrong'. 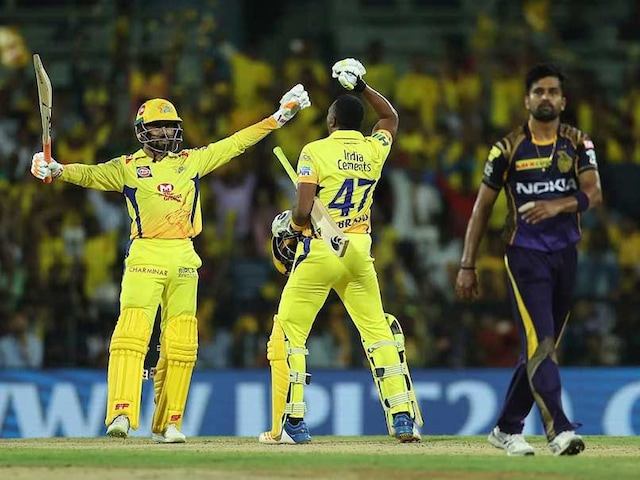 IPL 2018: Ravindra Jadeja celebrates after hitting Vinay Kumar for a six and winning the match for CSK.© BCCI

Chennai Super Kings' (CSK) homecoming victory at the MA Chidambaram Stadium was perfectly scripted by Sam Billings' 23-ball 56 run and Ravindra Jadeja's second-last ball six that saw CSK pull off a thriller against Kolkata Knight Riders (KKR) in an Indian Premier League (IPL) match on Tuesday. The hosts needed 17 runs in the last over when Dinesh Karthik, KKR captain, handed over the ball to Vinay Kumar to help his team get over the victory line. However, stars were not favourable as the bowler started off with a no-ball, which was hit for a maximum by Dwayne Bravo. Pressure mounted on Vinay Kumar as he continued to leak runs and was clobbered for a towering six by Jadeja that saw CSK win the match by five wickets. Soon after the match, fans took to Twitter to express their displeasure at Vinay Kumar's performance.

Game was lost when 17 runs were required on 6 balls, 17 runs for Vinay Kumar is like breakfast. Anything below 37 is unsafe.
Even 37 is unsafe.#CSKvKKR

Successful 200+ targets chased down at Chepauk:

Leaked footage of Vinay Kumar after the match. #CSKvKKR pic.twitter.com/q8ewIFazmf

My Respect for Rohit increased 10 Times because He won IPL with vinay Kumar.

Meanwhile, the KKR bowler also took to Twitter and asked the fans to keep their calm as 'sometimes things do go wrong'.

Hey guys take it easy, it's just a game. Where were you all when I defended 9 runs against RCB and 10 runs against Mumbai Indians!! Sometimes things do go wrong so CHILL....

Karthik-led KKR had put on a mammoth 202, courtesy some lusty blows from West Indies all-rounder Andre Russell, who remained unbeaten on 88 off 36 balls.

Chasing 203, Shane Watson (42 off 19) and Ambati Rayudu (39 off 26) gave the home team a dream start before KKR struck with wickets and cut their momentum.

But Billings and skipper MS Dhoni (25 off 28) kept their chances alive with a 54-run stand for the fourth wicket.

After Dhoni departed, Billings took the attack to the opposition and took CSK closer to the victory as Jadeja and Bravo's brilliant cameos helped their team register a hard-fought win.

Comments
Topics mentioned in this article
Kolkata Knight Riders Chennai Super Kings Vinay Kumar Indian Premier League 2018 Cricket
Get the latest Cricket news, check out the India cricket schedule, Cricket live score . Like us on Facebook or follow us on Twitter for more sports updates. You can also download the NDTV Cricket app for Android or iOS.